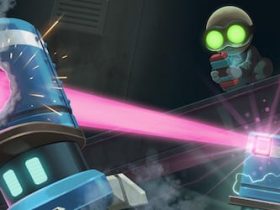 This Japanese side-scrolling action game promises that it “takes the best aspects of the 8 and 16-bit era classics you know and love, and transforms them with modern tech, fresh mechanics and fan input.” Protagonist Beck earns new weapons as he defeats boss robots, scattered throughout the game’s six pledged stages, from which his body can reconfigure into new shapes in allowing him to acquire new skills and abilities.

It’s clear from the concept that the project has drawn plenty of inspiration from Mega Man, with Inafune’s development team at Comcept including those that have not only extensive experience in the genre, but also with Capcom’s now dormant franchise.

“”While the beloved creations of my past are no longer at my disposal, the spirit they were born from still is,” Inafune explains within a supporting video. “By tapping into that spririt, we can create a new game – and new characters – that carry on the legacy of the past.”

Sadly achieving the funding target will only see the project release on PC, though stretch goals are specified for it to hit other systems. However this sees $1.35 million needed for a Mac and Linux version, whilst a rather staggering $2.5 million is required before they’ll commit to PlayStation 3, Xbox 360 and Wii U.

That said, at the time of writing it’s already achieved more than half of the original goal, sitting at $489,464 with 30 more days left to secure additional funding.

February 24, 2020
Do NOT follow this link or you will be banned from the site!