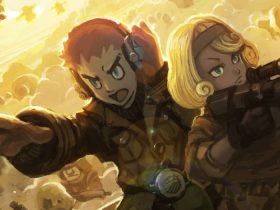 Tiny Metal Has Vanished From The Nintendo Switch eShop In Europe

Go ahead, scroll down. Go straight to the trailer attached to the bottom of the review and look directly at the final score. Forget about what actually goes into the writing and all the hard work that fills the space in between. Do you really think critics like tearing apart the passion of a developer’s finished product? We do understand the many man hours that these creators endure to ensure that the final package is up to standard.

Yet, we still must pick at them. We must provide some sort of insight to help you decide whether or not you should part with your cash based on our words, or even your judgement based on our opinion. Regardless, it still seems that you must spoil the final verdict anyway by completely ignoring my plea not to, and instead, use that thumb of yours to skip past these words in favour for the irrelevant grading that shapes the final verdict.

Before you make the assumption that I am having a public meltdown, understand that the opening paragraphs are completely, yet strangely, relevant to this Chinese-developed, side-scrolling hack ‘n’ slash game known only as ICEY. However, you will only ever understand the connection if you actually experience the game for yourself. For those who have no intention to do so, then you will never know, and may even be left confused forever as a result. I, for one, am absolutely fine with that. This is because a big chunk of the charm of ICEY lies within its context, surprise, and a little disobedience. It’s this element of the game that really should be discovered by the player going in as blindly as I did, rather than research and spoil it beforehand. 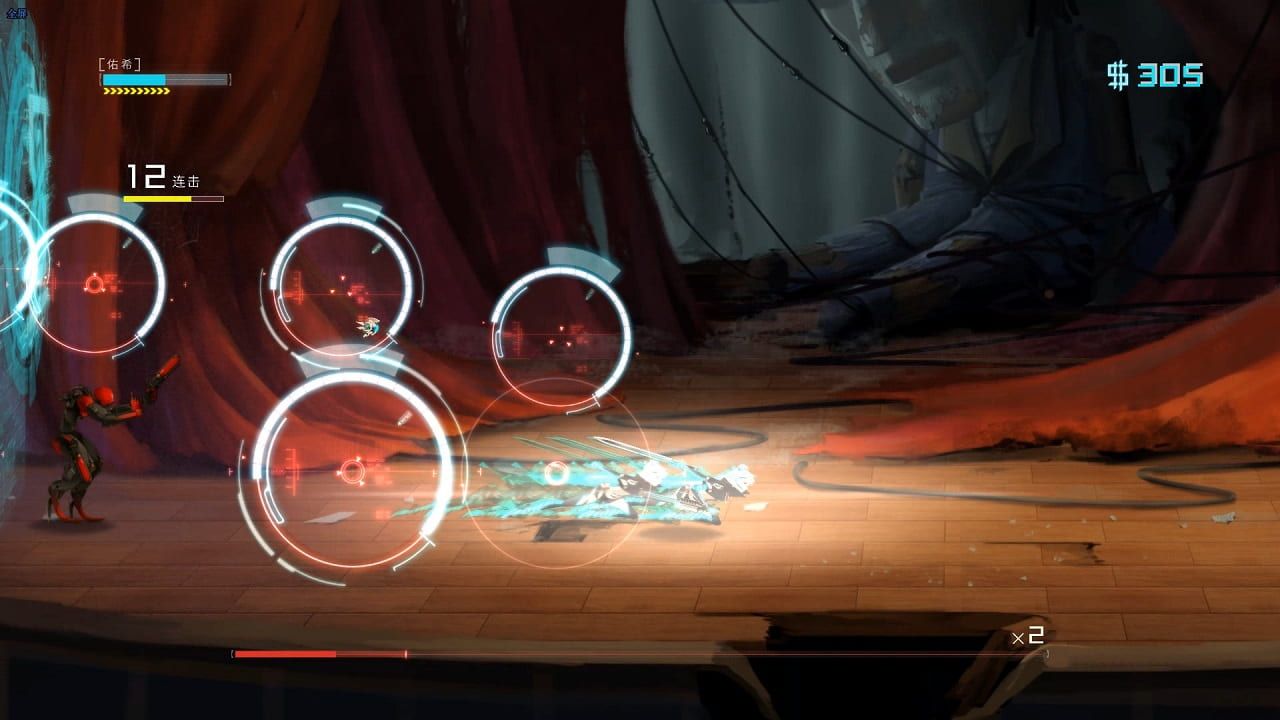 At its core, ICEY is a combo-breaking 2D hack ‘n’ slash that delves a little deeper than most games. The flashy and upgradable moveset somewhat reflects those of Devil May Cry and Bayonetta in how you are constantly spinning and slicing your way through enemies with an aerial acrobatic flair. Yet, as fun as it is, it’s not the actual combat that separates this game from others. It’s the complete self-awareness of the narrator that rides with the action that will keep you constantly and curiously invested.

The narrator ensures that you informed of what your main objective is and where you need to go to next. Your main mission appointed to you is to kill Judas, or rather its implied that ICEY is destined to take down the mysterious villain based on her own wish to do so. Like I stated earlier, the context is something to be discovered for yourself, so, as a result, I aim to keep the details of the story very brief. What I will tell you is that I would never expect to find such a gratifying level of comedy implemented here based on my first impression from seeing the game’s trailer. There are moments throughout the game that genuinely cracked me up, while others left me impressed by how blunt yet imaginative the writing can be. The whole narrative to it all beefs up to what could have quite easily have been a decent, straightforward side-scrolling brawler.

The tools that ICEY possesses are simple to learn and satisfying to execute. Your moveset consists of a light and heavy attack complimented with an evasive dash that can be used as a counter if timed right. Should you counter or destroy an enemy with the dedicated final blow button, small crystals will appear that can be absorbed for an extra air juggling attack on other nearby foes. This gives you a seamless string of combinations that can be linked between multiple bad guys, keeping your hands busy until all the cybernetic enemies have been defeated. As you progress, you can earn currency to extend or strengthen your move set even further – allowing you to modify your attacks with a quick tap on the L Button in the midst of a combo to dish out some extra damage. Leaning your Left Stick in the direction of your enemies while dashing past or attacking your adversaries provides you with a flexible combat mechanic that constantly keeps the momentum going. 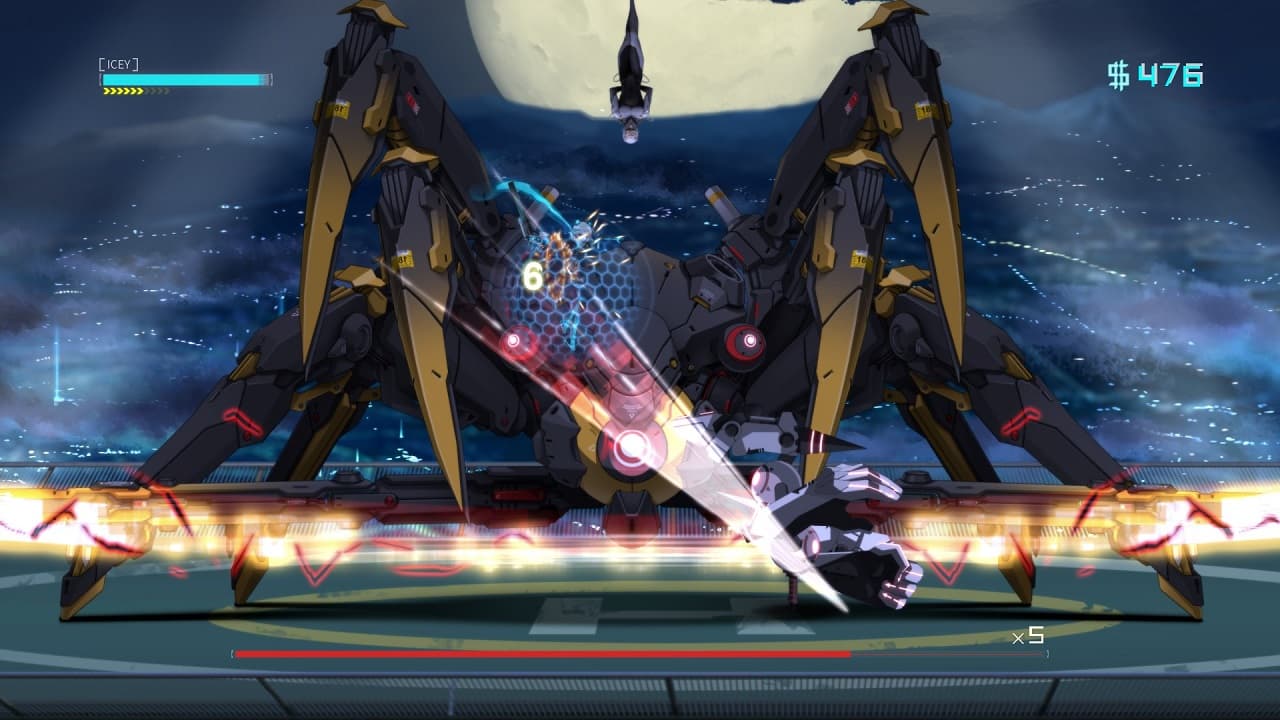 It’s a fun little brawler that’s incredibly affordable in price, making it a sort of ‘Bayonetta on a budget’ if you will (or Bayo-meta if you take its narrative into account). Granted, it’s a very short experience but the additional achievement-style trophies set in place are relevant if you want to explore everything that the game has to offer. The chances are that you will want to hunt for them too, regardless of whether or not achievement hunting is your thing. It all stays interesting enough for you to want to explore and break its boundaries just to see what kind of reaction that may stem from doing so.

Visually, ICEY is quite basic with some nice artwork in place to complement its message. While laying down the hurt in combos looks and feels good, taking damage, on the other hand, can seem a little lacklustre. It just doesn’t feel like there’s a great deal of weight behind an enemy attack which can make receiving a blow to appear underwhelmingly pillow-like on impact. This can also make reading an enemies attack quite difficult at first due to the lack of anticipation from an incoming shot. The game also does suffer from slow down quite frequently, however, strangely enough, this can somewhat add to the experience as though you’re breaking the game for playing it so God damn awesomely. The sound and BGM fits nicely within the action where you’re advised to bang on the old headphones for the better experience. It’s probably the only advice that you should truly follow because ICEY is a game that suits portable play perfectly.

ICEY is a great, if short, game that you will most certainly remember once you have put it to rest. Its clever and interesting take on both the genre and gaming, in general, keeps the surprises coming long after you have finished it. With combat being its main focus, the game is fun and satisfying with plenty of room to experiment and play about with. In any case, it’s definitely worth a punt if you have money to spare on your Nintendo eShop account. Just take my advice, if you are into flashy brawlers with an interesting twist then ICEY may be up your street. Alternatively, you can just completely disregard everything that I have said and just FOLLOW THE ARROW.