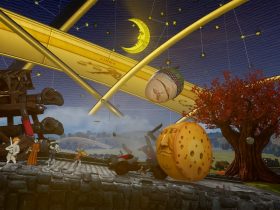 Whether you are searching for how to get Porygon in Pokémon Sword and Pokémon Shield or want to know how to evolve Porygon into Porygon 2 or Porygon-Z, we have you covered.

The first thing to let you know is that you will need either game’s Expansion Pass to access the Isle of Armor DLC.

After beating the final battle in the Isle of Armor’s storyline, head into Hyde’s room and interact with the Porygon that is hovering inside near the Cram-o-matic.

For those that are interested, Porygon’s Pokédex description reads: “In recent years, this species has been very helpful in cyberspace. These Pokémon will go around checking to make sure no suspicious data exists.”

This is currently the only way to get Porygon in Pokémon Sword or Pokémon Shield without trading one over from the other pocket monster games that you have inevitably played.

Hyde’s parting words are his wish that you cherish Porygon, as it will “give you a better appreciation for human ingenuity if you do.”

How To Evolve Porygon In Pokémon Sword And Shield

To evolve Porygon into Porygon 2, you will need to give the Virtual Pokémon an Upgrade item to hold and then trade it. You can find one in the Training Lowlands, or craft one using the Cram-o-matic which will require two Pecha Berries and two PP Up.

Whereas to evolve Porygon into Porygon-Z, you will need the Dubious Disc item. This can be found in the Workout Sea, but you can use the Cram-o-matic to craft one using one Light Ball and three Wishing Pieces if needed.