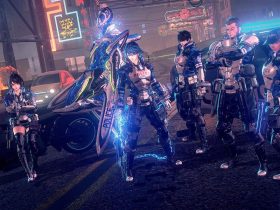 Midgar Studio and Fusty Game have revealed that Hover: Revolt of Gamers will see release on Nintendo Switch, with the game playable on the portable home console at Gamescom 2017 this week.

The Kickstarter-backed project had actually smashed a stretch goal for a Wii U version although, unsurprisingly, it sounds like that intention may have been changed thanks to the runaway success that Nintendo Switch has been met with.

The fast-paced single and multiplayer parkour game has drawn inspiration from the crazy universe that Jet Set Radio was set in, the interactivity seen in Mirror’s Edge, and movies such as Fifth Element, seeing players explore the high-tech city ECP17 – which its inhabitants also call Hover City.

However, when the Great Admin cut communication with the Galactic Union and established a strong dictatorship, entertainment has been banished and having fun is now illegal.

You take charge of the Gamers, a team of young rebels that are only too happy to fight against the new anti-leisure laws – equipping themselves with high-tech gear that allows them to perform ridiculous jumps and travel at ludicrous speed, roaming the city to sabotage propaganda and help citizens as they figure out how to reach the Orbital Station to warn the Galactic Union about what’s happened.

With the promise that players can freely switch between offline to online mode to join friends and others from around the world either cooperatively or competitively, it sounds and looks like an absolute blast.

Hover: Revolt of Gamers will see release on the Nintendo eShop for Nintendo Switch worldwide.