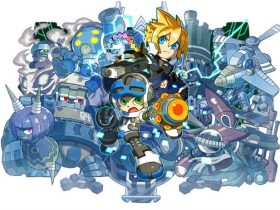 Update: The Pokémon Company International have shared localised information about the special move that only Hoopa Unbound will be able to use, Hyperspace Fury.

With this Dark-type move, Hoopa “sends its six arms and six rings flying to surround its foe and attack from all directions!” More significantly, it will negate any moves that Pokémon have tried to use to defend themselves such as Protect or Detect.

Now, more about how to unleash Hoopa Unbound. When you enter a Poké Mart after meeting certain conditions in Pokémon Omega Ruby or Pokémon Alpha Sapphire, a worker will share an eerie tale with you about an old man who left the store saying “Three days… For a mere three days will Hoopa be unbound…” He left a mysterious jar called the Prison Bottle behind, which was once used to seal away Hoopa’s power long ago.

Serebii reports that the Japanese manga magazine details that Mythical Pokémon Hoopa changes into its “new and truest” form in-game by using a Prison Bottle, which is obtained from a Poké Mart clerk after meeting specific conditions.

Becoming Hoopa Unbound, which we already know to be a Psychic and Dark-type Pokémon with the Magician Ability, it will then be able to use new signature move Hyperspace Fury.

CoroCoro also confirmed that Mega Latios and Mega Latias will appear in Pokémon the Movie: Hoopa and the Clash of Ages, which releases in cinemas across Japan on 18th July 2015.