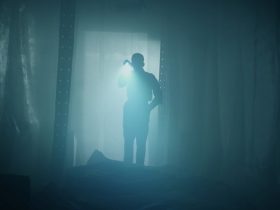 Big Sugar and Steel Mantis have confirmed a release date for Valfaris on Nintendo Switch.

This heavy metal-infused 2D action-platformer will let you savagely reduce foes to piles of gibs with brutal weaponry, as you venture ever deeper into the dark world.

After mysteriously vanishing from galactic charts, the fortress of Valfaris has suddenly reappeared in the orbit of a dying sun. Once a self-contained paradise, the grandiose citadel now plays host to an ever-growing darkness.

Therion, a fearless and proud son of Valfaris, returns to his home to uncover the truth of its doomed fate and to challenge the arcane evil at its very heart.

The game has been created with pixel art that Andrew Gilmour has handcrafted, and is set against a seismic soundtrack from former Celtic Frost guitarist, Curt Victor Bryant.

Valfaris will release on the Nintendo eShop for Nintendo Switch worldwide on October 10th, and at retail in November.