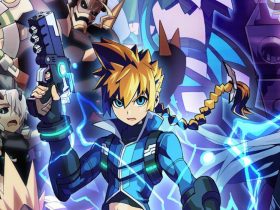 After defeating the evil witch and rescuing the most beautiful princess in the whole kingdom, recapturing the royal diamond mines from giant spiders, and freeing the people of the five kingdoms by slaying the terrifying great white dragon, a band of epic heroes part ways as they grow old and the legendary stories of their exploits are no longer muttered in taverns.

But, when these Has-Been Heroes are summoned to the royal court once more, they are faced with their most heroic quest yet – to take the King’s twin princesses to school. 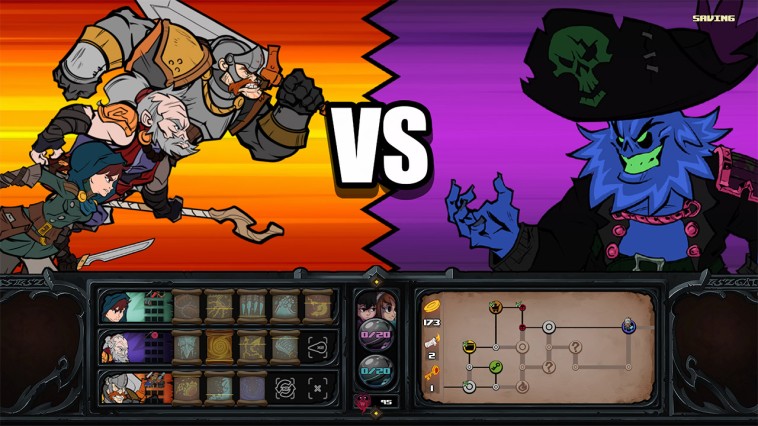 This lane-based roguelike game of strategy and action comes from Frozenbyte, a developer that many will already remember from Trine Enchanted Edition, Trine 2: Director’s Cut, and the upcoming co-operative spellcasting blast ’em up, Nine Parchments.

As you lead the princesses across the war-torn kingdom, players control three heroes – the young and eager Rogue, the wise monk Metacles, and the giant-wrestling warrior Crux. Each character holds their formation in three lanes, and, as the army of the dead endlessly approach them, they must protect the princesses by coordinating melee attacks, keeping an eye on their action cooldowns, and combining hundreds of different spells cast from scrolls in looking to make them even more potent thanks to cataclysmic combo effects.

That concoction of strategy and action makes Has-Been Heroes soon prove itself to be an addictive experience, but the greatest hurdle that the quest faces is that it will take some time to understand the mechanics that underpin it. With so much to take into consideration, your early attempts to succeed in your adventure will harshly cut short as permadeath sees your wearied heroes fall to their knees in defeat. 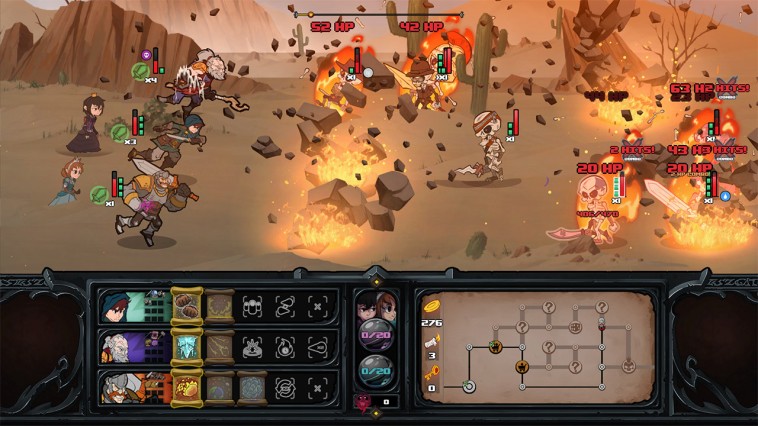 If there is one area where the game deserves severe criticism, it is in how poorly it teaches the player what is expected of them. Obscure animations with right and wrong pointers look to teach you the basics when you start a new game, but this is insubstantial with the player left to work out how to attack, stun, switch their heroes between lanes, juggle enemies in the air with multiple blows, and cast spells to conquer each battle. When one of your heroes falls your party is overcome by monsters and you must start over, and, without guidance, this can happen all too quickly early on that will deter players from sticking it out longer.

But, for those that have the desire and tenacity to persevere, learning the tricks that are necessary to keep the overwhelming undead hordes in Has-Been Heroes at arm’s length will soon see thrill of surviving each combat encounter as you make your way across the world map feel increasingly more rewarding.

Differentiation in approach comes from the heroes that you can unlock, presenting the player with new playstyles to consider as they rally to your side and open the chance to experiment with your three-strong party’s make-up to see which combination works best for you. 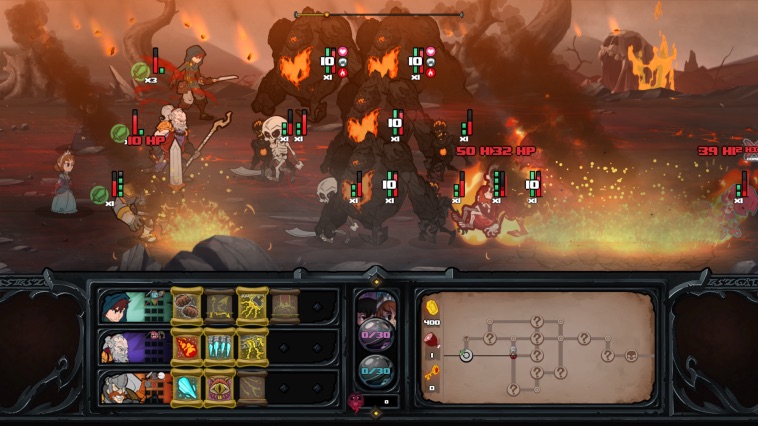 This review comes after the developer has released a free expansion to Has-Been Heroes, throwing in plentiful more content with eight young heroes to unlock, more than 120 new spells, over 150 new items, and the new Sky Temple region to the main game. That includes adding the Trine heroes to swell the ranks, with Amadeus the Wizard, Pontius the Knight, and Zoya the Thief – recreated in the game’s cartoon-like art style – becoming available as playable characters once you have unlocked the Epic Quest mode.

There are also two new modes for those seeking a greater challenge in Seed Mode which lets players share a seed number with others to play the exact same run as one another with a timer upon completion, opening up the chance to compete for the best times. And then there’s Challenge Mode that places you in a tremendously tough battle with a pre-set loadout of characters, items, and spells, although players must first unlock the corresponding characters to take these on. The reward for conquering these are the Young Heroes, meaning that they are certainly battles that you will want to overcome.

Has-Been Heroes heroically treads the line between strategic brilliance and overwhelming frustration to result in an experience that will leave many feeling like toppling the Great Ghoul’s evil army is an insurmountable task. It is in the game’s difficulty and lack of accessibility, then, that sees these wearied heroes falter. Which comes as a great irony when you remember how ridiculously simple their quest had first sounded.