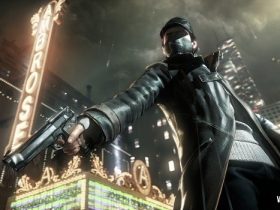 Technicolour visuals, retro chiptune beats and rhythm based gameplay prove to be an eclectic mix within the psychedelic BIT.TRIP series.

Appealing to all manner of audiences, this essential ‘ultimate package’ includes every entry; BEAT, CORE, VOID, RUNNER, FATE and FLUX, charting the adventures of sole protagonist CommanderVideo in their entirety.

Whilst players are free to select any game to play, BIT.TRIP BEAT kicks things off chronologically. Reminiscent of Atari’s celebrated 1972 arcade classic Pong, the player required to tilt the Wii Remote forwards and backwards to move a paddle along the left-hand side of the screen as they aim to deflect oncoming groups of blocks from the right.

Progression rewards you with more visual and aural variety, animations in the background aiming to hide blocks from your view – continued failure resulting in all colour being stripped from the screen. Devoid of sound, you must successfully deflect blocks to re-enter your game, otherwise you’re bound for the Game Over screen. 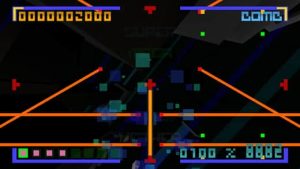 CORE, for me, proved to be the most difficult. Continuing the rhythm-based trend, players are required to fire a beam, along both horizontal and vertical axis, in an attempt to destroy increasingly complex waves of blocks that emerge on-screen.

Pre-empting their arrival is crucial here, and it may take some practice before you begin to enter your stride – something I certainly learned myself this from experience! 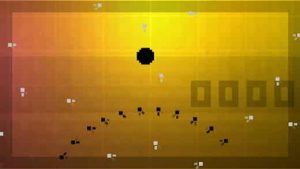 VOID continues to take an entirely different approach, the player in control of the titular ‘void’ – a black circle that the player must move freely around the screen to collect black blocks, whilst avoiding the white. The challenge here is that as you engulf such black blocks, the void increases in size and the player must judge when best to disperse it to ensure they can pass through the next series of white blocks unharmed. The larger the size, the greater the quantity of bonus points that you receive. 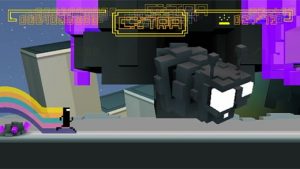 RUNNER, regarded by most as the series’ strongest entry, changes pace entirely. In the side-scrolling shoes of a continually forward-moving CommanderVideo, players must jump, slide, kick and spring their way to overcome incoming obstacles, ledges and chasms.

You’ll work your way through a selection of levels divided into three zones, each with their own unique visual and audio style, that culminate with a relentless boss fight. Plasters, scattered across levels, allow CommanderVideo to produce a multi-coloured rainbow once three are gathered. Additional collectibles appear in the form of Gold Bars, the full collection of which allow you participate in a ‘Retro Challenge’ level for bonus points. These take the form of a 2D NES style level, in which the player must utilise the same skills to collect as many Gold Bars as they possibly can. 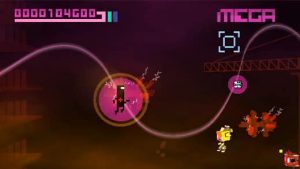 FATE is another unique entry, players assuming control of CommanderVideo as he freely navigates a predetermined trajectory. Inspired by shoot-em ups, you must neutralise numerous enemies as you progress, ensuring you collect as much health as possible to ensure that you aren’t obliterated yourself.

Power-ups are provided in the form of allies, which include cameo appearances from the likes of Super Meat Boy and Mr. Robotube. Granting a temporary upper-hand, these also serve to enhance the visual spectacle. 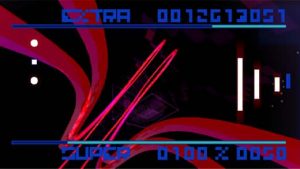 The finale to the series, FLUX, sees CommanderVideo return home, encompassing elements from previous games. As with BEAT, the player controls a paddle but this time on the right-hand side of the screen. Blocks for the player to deflect are now also all white, rather than being colour coded as before, and as with VOID there are blocks that the player must avoid.

Rounding off the package is a vast quantity of unlockable content – including videos, art work, music galleries and fan remixes – providing an added incentive, even for die hard fans who have previously played through the series.

No other game series excels in providing such diversity of gameplay styles and sheer brilliance on show here. Addictive, relentless and rewarding, BIT.TRIP COMPLETE amounts to a pyrotechnical celebration of the very best that WiiWare ever had to offer. To be available at an irresistible price point of £17.99, be sure not to miss out.