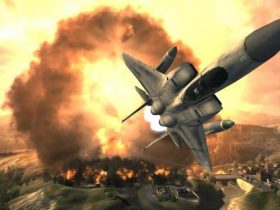 It was with slight apprehension that I approached the aptly titled ‘Dojo Ono,’ named after the Street Fighter series’ irrepressibly enthusiastic producer Yoshinori Ono, at the Nintendo 3DS Preview Event in Amsterdam last week.

Fighting games, traditionally enjoyed on Arcade Machines and consoles where fans can employ the use of Fight Pads and Arcade Sticks, have never found as much favour on handheld devices. Yet through a renewed accessible appeal and perhaps the best use of the Nintendo 3DS tech that I’ve seen so far, Capcom may be able to disperse such a stigma with this latest outing. 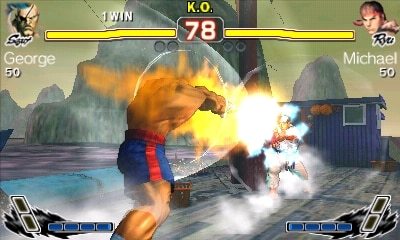 Including 35 characters and all stages, costumes and moves found within the console versions, this is certainly a portable Street Fighter title not to be sniffed at.

Before heading into the game you are given the opportunity to choose between two differing Camera Views – Standard, which provides a traditional side view that most fans of the series are accustomed to, or Dynamic, which places the camera behind and over the shoulder of your player. The latter is suggested to be used by those more well versed with the Street Fighter franchise, but within seconds of a match it clearly shows the Nintendo 3DS technology off in the best light. Having faced off against an A.I. controlled Dhalism, his stretchy limbs and signature Yoga Flame move soon came careering towards the screen – it was an impressive use of the tech to say the least, and truly makes for a very engaging experience for the player.

Alongside this, the game features two control schemes – Light and Pro – effectively targeting both those new to the genre with an increased level of accessibility, and those with far greater experience meaning that they are able to K.O. their opponents within seconds – let’s face it, we all wish we could!

Whichever scheme you choose will provide you with differing capabilities of mapping certain controls to specific buttons. In Light mode, you are able to perform moves in the usual manner by utilising both the Control Pad and relevant button presses. Yet an added bonus for those that always struggled to pull off more complex moves, such as the Super and Ultra combos, is that you are now able to map four moves to the touch screen that may be performed at just a simple press. This eradicates a level of frustration that most endure, and will allow the title to gain more accessibility in design.

Seasoned players that are perhaps scoffing at the inclusion of such simplistic methods will probably stick to Pro mode, in which you’ll have to input all special moves manually but you will still be able to map button combinations. 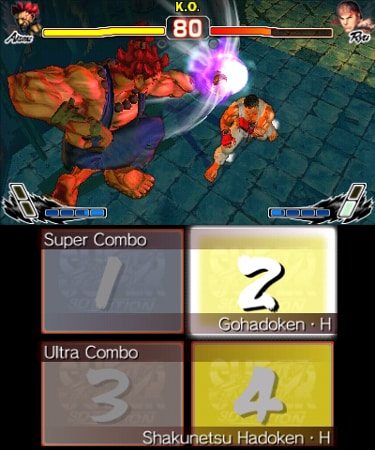 Yoshinori Ono was keen to quieten fears of imbalance between the two control schemes during multiplayer online, as Capcom have taken the time to implement varying preference options that allow you to filter out those using a differing control scheme to you as you enter matchmaking. However, opposing players are able to use differing camera views, so whilst one may be using the Standard view their opponent may prefer to use the over-the-shoulder Dynamic orientation. Similarly a player may play in 2D, whilst another fights the match in 3D.

In regards to utilising the Nintendo 3DS’ unique StreetPass function, players will be able to battle stat-based figurines of fighters with others that you pass on your travels – the results of which you’ll see the next time you boot up the game. The more you battle, the more figurine points that you earn that can the be used to acquire further figurines for your collection. There will also be trade functionality for you to swap amongst your friends, something that may become a necessity if you are to amass the entire collection which currently sits at around an approximate 500 figurines.

Those that own a copy of the game will also be able to send a Versus demo to a friend through the handheld’s Download Play functionality. Whilst content is limited, with players only being able to battle on a single stage as Ryu, Ono hopes
that even those that weren’t particularly drawn to the title originally will be able to get enough of a taste to be tempted to purchase it. 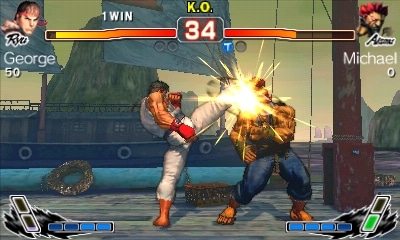 Overall, Super Street Fighter IV 3D Edition is easily one of the most impressive titles amidst the initial wave on Nintendo 3DS software. With incredible utilisation of the 3D capabilities of the system, accessibility for varying skill levels and seemingly well integrated multiplayer options, this is sure to serve to build and further expand the popularity of the Street Fighter franchise.
Tags: Capcom Nintendo 3DS
0 Shares
Share on Facebook Share on Twitter Share on Reddit Share on Email
Alex Seedhouse January 22, 2011