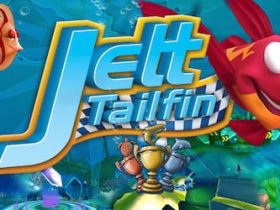 Jett Tailfin swims toward Wii U release this summer

Paladin, Wizard, Ranger, Warlock, Thief, Priest or Sorcerer. The first decision that you must make in Hammerwatch is an important one, as, choose a hero class that doesn’t particularly suit your usual playstyle, and it will take far longer for this fantasy-themed hack ‘n’ slash dungeon crawler to click.

Do you choose the Paladin, who swipes at his enemies with a sword, can heal himself and block projectiles with his shield, the Sorcerer who can shoot ice shards that bounce between enemies, summon comets to stun enemies and has a frost shield for protection, or the Ranger that fires penetrating arrows, drops bombs and can temporarily trap enemies in vines. Every character has their pros and cons that, unsurprisingly, result in the need to approach the game in different ways.

Your quest is a simple one. Enter Castle Hammerwatch and kill the huge red dragon that has taken over the throne. Managing to accomplish it, however, is another matter. Hammerwatch begins with little explanation, the lack of a tutorial catching me off-guard as my Wizard fled for his life from a swarm of bloodthirsty bats while I worked out how to hastily fling fireballs in their direction. Those that want early pointers will need to pore over the game’s Help section, a 9-page summary about how to play, character progression, enemies, the controls, classes, items and vendors – something that helped me prepare for the adventure ahead. 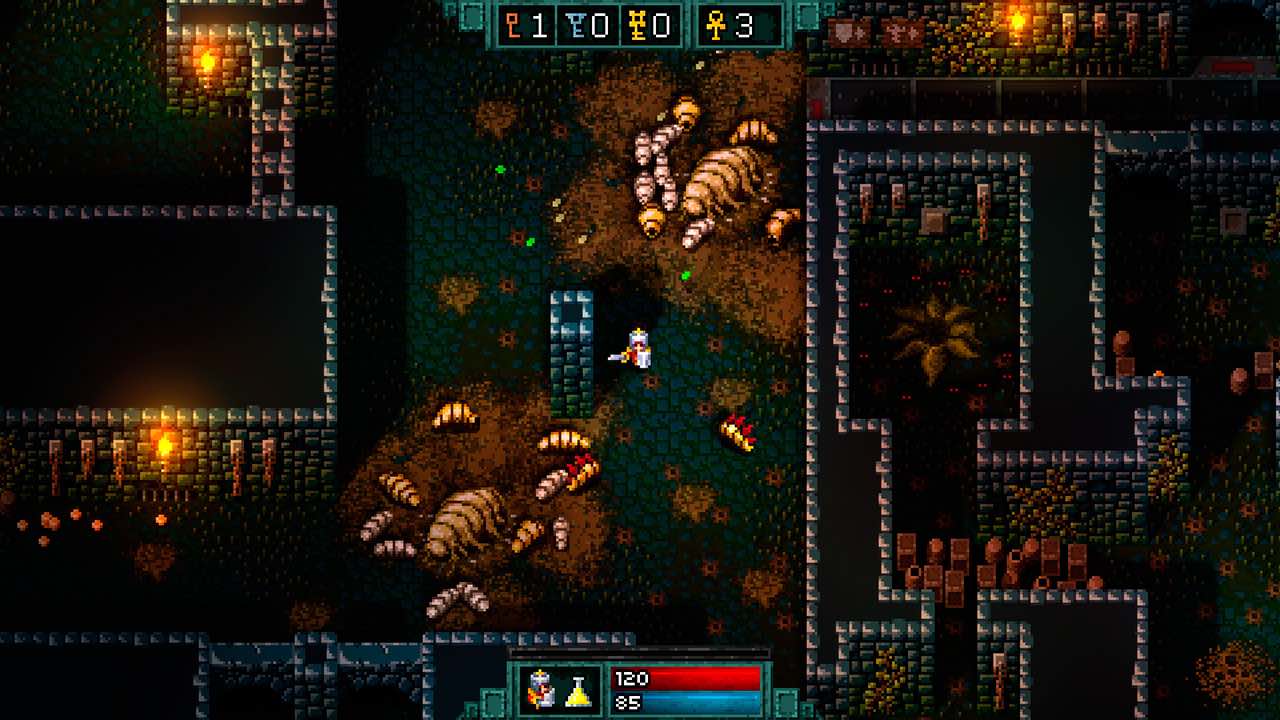 That being said, there isn’t too much to get your head around. And, naturally, the more that you play Hammerwatch the more that you learn about overcoming the ravenous enemies and befuddling traps that developer Crackshell place in your path. There are three difficulties to choose between in Easier (enemies do less damage and die quicker), Medium (standard difficulty) and Hard (only for very skilled players), helping to cater to genre newcomers as well as those looking for a challenge.

Especially so if you want to start experimenting with modifiers. The developer allows you to choose whether to activate ‘Challenges’ or ‘Crutches’ at the risk of your own sanity. While removing extra lives, sharing HP between all players or having no mana regeneration will heighten the difficulty, you can also ease the challenge with infinite lives, double damage and others – any modifiers impacting your eventual score. This customisable difficulty is welcomed, helping those that may give up too early the chance to see Hammerwatch through to completion while providing others with a reason to return in chasing ever higher scores.

The inspiration that the developer has drawn from Atari’s Gauntlet series is clear, but Hammerwatch has twin-stick aspirations on Nintendo Switch. The Left Stick is used for movement, the Right Stick to aim and the ZR Button for your main attack. Your skills and abilities, which require MP, are then mapped to the ZL, L and R Buttons, once you have had the chance to unlock them all. That progression will come in smashing barrels and chests to collect money that can be spent to buy skills and upgrades at Vendors that sell their wares in Castle Hammerwatch – retrieving Vendor Coins that you may come across rewarding you with a discount. 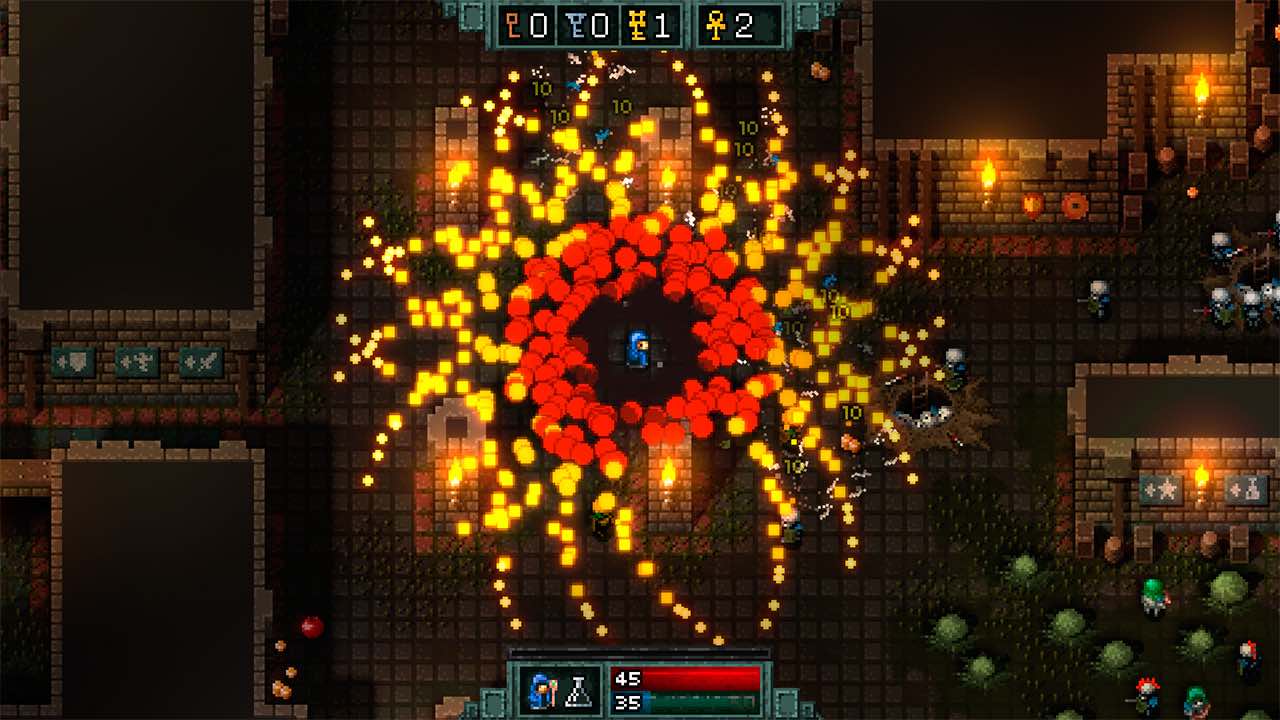 Your quest starts in Castle Hammerwatch’s prison where bats, maggots and creepy crawlies will gnaw at your hero in an effort to cut your adventure short. That means that you must slaughter hordes of monsters as you make your way upwards to the throne room, retrieving keys to unlock doors, hitting switches to open secret paths and gobbling food to replenish your health. You start with two extra lives, and, once these are gone, it’s game over. Luckily there are more scattered around the castle for you to collect to lend you more chances – that is, unless you’ve played around with the modifiers.

Those that can summon the courage to warily tread along Castle Hammerwatch’s unwelcoming corridors alone can do so, but what I’m sure will attract many is the chance to rally together up to four players to brave its perils in local co-op. Eventually, there will also be a free update that will add support for online multiplayer, with BlitWorks, who handled the port to the portable home console, last mentioning it a few months back. Hopefully, it isn’t far off now.

The main complaint that I have with Hammerwatch lies in the lack of procedural generation. The dungeon layout remains the same with every run, and, as far as I can tell, the enemy placements, too. That allows it to descend into repetition with a lack of surprise, even if some may argue that is often the point to these types of games – in starting to memorise where everything is. That’s alleviated somewhat thanks to the Temple of the Sun expansion, Survival and Hero Defense modes helping to lend some differentiation, but the disappointment still stung.

I would argue that Hammerwatch is best experienced with a group of like-minded adventurers. There’s far more fun to be found in the chaotic mayhem of heroically charging down a corridor together, slinging spells at your enemies, cutting them down to size and knocking back an arrow or two, compared to when having to endure the game’s repetitive design alone. There are enough successes to consider a purchase, and even more so once online support arrives.