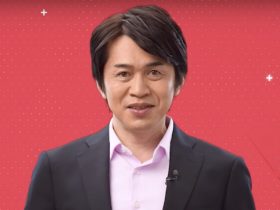 Chequered Ink has announced that Gyro Boss DX will release on Nintendo Switch this week, an orbital avoid ’em up that challenges you to survive as long as possible.

After a band of intergalactic pirates led by the fiendish Gyro Boss lay siege to your home planet, you discover that your technology is no match for their crazy weapons.

Every game is doomed from the start, meaning that you must dodge Gyro Boss’ endless attacks, aim to complete mission objectives, and achieve the best possible score.

It comes to Nintendo Switch with a new party mode for up to four players, that, while seeing you battle the boss together, cycles through bizarre mini-games like faulty brakes mode and civil war.

Gryo Boss DX will release on the Nintendo eShop for Nintendo Switch worldwide on May 3rd, priced at £3.99 ($4.99).