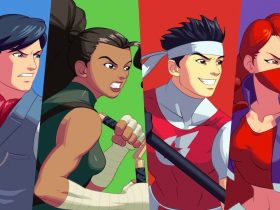 Guilty Gear
In 1998, one game made huge waves within its genre: Guilty Gear for the original PlayStation. Spectacular special moves that brought the console to its limits, a hard rock soundtrack that still has to meet its match, innovative mechanics and unique characters that kicked off an incredibly complex and epic anime story will equally fascinate fighting game fans today, as it did 20 years ago!

Guilty Gear XX Λcore Plus R
First released in 2008 in Japan, Guilty Gear XX Accent Core Plus R is the final instalment and epitome of the Guilty Gear XX series that polished everything introduced in the 12 previous instalments to reach optimal balance. Mechanics like the universal overhead attack “Dust” as well as “Roman Cancel”, which allows players to cancel all kinds of actions and therefore increases their options dramatically, set the bar for the series’ sequel: Guilty Gear Xrd.

Guilty Gear 20th Anniversary Edition will release at retail and on the Nintendo eShop for Nintendo Switch worldwide in Spring 2019.