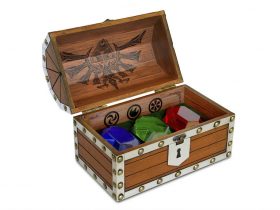 This Legend of Zelda Rupee Chest Paperweight Is Yours For $99.99

This 2D open-world role-playing game is set in a medieval fantasy world. After the malevolent Witchmaster destroys the Vamp’Ire village, you wake up as a newly-born vampire on a mission to seek your revenge.

Your lone hero will wander the world, accepting quests that will see you encounter many NPCs and engage in “entertaining dialogues and snarky comments.”

You can choose whether to keep on a righteous path or act with deceit, levelling your character to unlock new skills and abilities and strengthening your combat prowess through upgraded gear.

“Vampire’s Fall: Origins is our tribute to classic RPGs,” explains Early Morning Studio’s Emir Kuljanin. “After receiving very positive feedback from our mobile and PC players, we are excited to announce Vampire’s Fall: Origins’ upcoming release on consoles so that more people can enjoy our dark fantasy vampire-themed RPG born out of love for old-school gaming.”

Vampire’s Fall: Origins will release on the Nintendo eShop for Nintendo Switch worldwide in Autumn 2020.