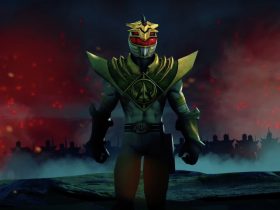 New Power Rangers: Battle For The Grid Trailer Warns You About Lord Drakkon

Scholastic, Sony Pictures Consumer Products and Cosmic Forces have revealed that Goosebumps Dead of Night is in development for Nintendo Switch.

This spooky first-person survival horror game takes inspiration from R.L. Stine’s best-selling Goosebumps book franchise and the film series, and, after Slappy the Dummy steals pages from classic Goosebumps tales, he unleashes legendary monsters who are out to get you.

To survive this nightmare you will need to recover the missing pages without getting caught, evading creatures such as the Graveyard Ghoul, Lawn Gnomes, Annihilator 3000, Murder the Clown and the Werewolf of Fever Swamp.

The experience has built on Goosebumps Night of Scares, a VR game that was previously released on mobile devices.

That content has now been reimagined for the portable home console, with enhanced high-definition graphics, new chapters like Dr Brewer’s Conservatory and the Tesla Tower, more puzzles added to the Stine House, five new monsters, and more.

Goosebumps Dead of Night will release for Nintendo Switch worldwide in Summer 2020.