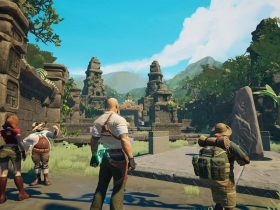 Jumanji: The Video Game Out On Nintendo Switch This November

I always look forward to a Nintendo Direct and not just for the obvious reasons you’d expect, like potentially seeing what Nintendo franchise will be next to grace our consoles or those surprise announcements you’d never thought you’d see or getting a tease at the next combatant for Super Smash Bros. Don’t get me wrong, these moments are enough to leave my jaw truly dropped, but just as exciting is guessing what shadow drops we might see. The latest Nintendo Direct Mini certainly didn’t disappoint in that department however it was the ‘out of nowhere’ announcement and release of Good Job! that left me most intrigued.

In Good Job! you play as the child of a CEO working your way clumsily up the corporate ladder of a company taking on a range of different duties within its nine-floor building. Each floor represents a different department of the company – including everything from finance and manufacturing to recreation and even robotics – and with it four self contained levels with their own specific task to complete.

Good Job! feels like a puzzler but it’s one that’s less about figuring out difficult problems and more about simple experimentation until you reach your goal – be it a relatively straightforward method or a totally destructive one. As a simple worker, your abilities are limited to moving about, picking up and dragging objects. However, using the environment around you, you’re able to essentially expand your limited abilities much farther. Take for example a very early stage on the Finance floor of the building that tasks you with simply getting a projector to a conference room and switching it on. Sure, you can slowly trundle the big device around, but let’s be honest, that’s far too boring. Instead why not use the stretchy cable of a plug inserted into a socket as a slingshot, firing the projector so hard it’ll bust through walls?

On the Logistics floor one level has you trying to gather all the workers in one area of the warehouse. You can pick up a chair, seat a worker on it and drag their lazy butts to the required area but again this is a long and tedious process. So why not make use of the four attached seats and carry four workers at the same time? Better still perhaps you can operate the overhead crane to pick up a bunch of workers and carry them over.

Good Job! is extremely silly taking the everyday tasks of a business and having you complete them in surreal and quite frankly ‘so-dangerous the company would be shut down in minutes’ manner. If you’ve played games like Overcooked or the recent Moving Out demo, Good Job! carries a very similar vibe, it’s over the top and often-messy action resulting in smiles aplenty. In fact, those smiles only grow bigger when adding another player to the mix. With two clumsily handed players at the helm, carnage is quick to follow especially with so much to be broken and damaged littered around you. Thankfully the game splits the screen when players drift far apart meaning the camera will rarely pull too far away and keeping the action clear for both players.

Each level has two hats and two outfits to find and as you may have already guessed these aren’t merely restricted to high-visibility vests and flash business suits. Expect to see everything from Viking helmets to butterfly wings. Once you’ve finished a level, you’ll be graded based on how many items you destroyed, the damage caused and how long it took you to complete the required task. Whatever your score best in will be your overall grade allowing you to opt for different playstyles. Are you going to take it slow but cause minimal damage or go about like a hurricane making speed your priority?

I absolutely love the way Good Job! looks with its uncomplicated style and bright, bold colours. And despite the characters only being stick figures, the game has a surprising amount of charm about it too. The way the game is structured also uses its corporate business setting to great effect, a central elevator essentially acting as a level select as you hop floor to floor.

As much fun as I had with Good Job! there were times where I found myself frustrated. As simple as the controls actually are, this can also lead to moments like picking up the wrong item from a stack or bundle. Similarly, a lack of any camera control resulted in a less than ideal viewpoint when trying to perform certain tasks. Speaking of tasks, while a majority are great fun to complete, there are times where not every moment is a home run in creativity. Slingshotting heavy equipment never gets old but the carrying of crates or dragging of boxes through narrow doorways feels far too close to… well actual work. At the end of the day though these awkward moments are few and far between.

Good Job! takes the pretty mundane day to day tasks of a business and turns them into chaotic and messy affairs that for the most part turn out both surprisingly entertaining and even laugh out loud funny. As far as shadow drops go after a Nintendo Direct (or in this case a Nintendo Direct Mini) Good Job! is not only one of the more surprising ideas but one of the better ones too.