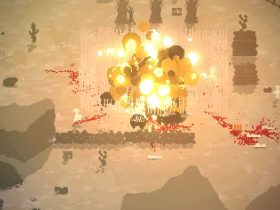 Conquer The West In Colt Canyon On Nintendo Switch

It follows the largely misunderstood and altruistic Ikk on a journey to cheer up his only friend in this world, a giant landbound whale called Sally. In order to do so, players will hunt for the right trinket to make her happy in the deep and dark places that lurk nearby.

With Death as his mentor, Ikk will be supplied with abilities and an arsenal that will help him traverse an ever-changing land and defeat creatures that don’t take too kindly to his trespassing.

Developer Art in Heart has packed the game with passive and active abilities, secret areas that will reward you with different items, multiple endings, and leaderboards so that you can show your friends how much better you are than them.

GoNNER will release on the Nintendo eShop for Nintendo Switch on June 1st.