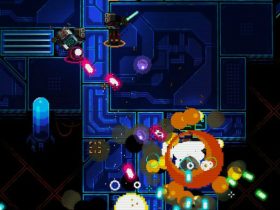 NIS America, PLAYISM and Atelier Mimina have confirmed a release date for Giraffe and Annika on Nintendo Switch.

It stars Annika, a bright-eyed girl with cat ears, who works with Giraffe, a cat-boy with an old soul, to recover her memories after waking to finds herself stranded on the island of Spica without them.

With “a manga-style comic narrative,” you must recover three shimmering star fragments to unlock new powers that let you reach previously inaccessible areas to collect additional outfits and “cat-tastic meow-sterpieces” of art to view at the local museum.

There will also be a Giraffe and Annika Musical Mayhem Edition ($49.99) which is now available to pre-order on the NISA Online Store.

This comes with a physical copy of the game, the Songs of Spica official soundtrack CD, Annika’s Adventure Log art book, Familiar Faces patch set and a Collector’s Box.

Giraffe and Annika will release at retail and on the Nintendo eShop for Nintendo Switch in North America on 25th August, across Europe on 28th August and in Oceania on 4th September 2020.