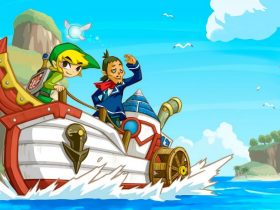 Nintendo of Europe have today revealed that a demo for upcoming Nintendo DS title, Ghost Trick: Phantom Detective, is now available to download from the Nintendo Channel on Wii straight onto a Nintendo DS system using the Nintendo Wi-Fi Connection service.

Ghost Trick: Phantom Detective, developed by Capcom and being distributed across Europe by Nintendo, sees the player in ther comedic role of recent murder victim Sissel, as his soul lies in the ghost world where he must make use of his ghostly powers to alter the fate of others.

This latest demo, titled “Deliver the Christmas Present!”, you will encounter exclusive gameplay content which features in this demo as you aim to complete a unique quest.

You must deliver a music box to a young girl named Kamilla Kanon and to aid you in your task you will be able to possess a range of objects along the way – such as the Christmas tree, which can be manipulated by activating the musical jingle contained in the tree’s star. Making use of such items, you will directly affect how Kamilla interacts with her surroundings and ultimately dictate the course, and fate, of the game.

Ghost Trick: Phantom Detective is due to launch across Europe exclusively for Nintendo DS on January 14th.