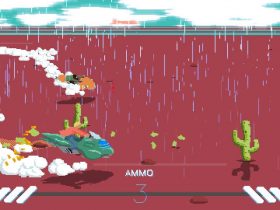 Playtonic Games has revealed that you can now gulp down the 64-Bit Tonic in Yooka-Laylee on Nintendo Switch.

This 64-Bit Tonic had been a stretch goal in the Kickstarter-backed project, for when it had soared past £1.1 million – promising to deliver a Nintendo 64 shader mode if it was achieved. And, it was.

“Strap on those nostalgia goggles and boot up Yooka-Laylee – it’s time for an adventure of 64-bit proportions. We’ve pounded the dough and rolled out the 64-bit Tonic update (it’s free, sorry Trowzer) to Nintendo Switch and PC versions of Yooka-Laylee,” Playtonic Games explain.

“We haven’t forgotten about PlayStation and Xbox players – you’ll be getting your hands on the Tonic at a later date once we have squished a few final bugs.”

Yooka-Laylee is now available on the Nintendo eShop for Nintendo Switch worldwide.