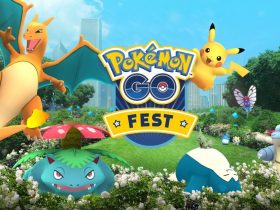 Pokémon GO Fest Livestream Gets You In On The Action

The Pokémon Company International have launched Pokémon Jukebox, a free Android app that lets you listen to music from the Pokémon series.

Fans can listen to three new Pokémon tracks each day at no charge, with additional tracks available to buy through in-app purchase.

The Pokémon Jukebox app contains numerous features, which have been broken down by The Pokémon Company International as follows:

– In-App Song Purchases: Purchase specific songs to make them playable at any time.

– Keyword Song Search: Search for songs with keywords and concept tags like “Battle,” “Opening,” “Route,” and others.

– Loop Functionality: Enable an endless loop for songs, just like during normal gameplay, or set the number of loops for each song.

– Custom Tagging: Create original tags, such as “Intense Songs,” and connect them to any song.

– Mix Feature: Set whether songs fade out when they end or immediately jump to the next song without a break.

– Medleys: Purchasable medleys play several songs together in one long collection based on themes such as “Battles” or “Routes.”

– Playlist Creation: Create a playlist of songs to listen to, including shuffle and repeat functionality.