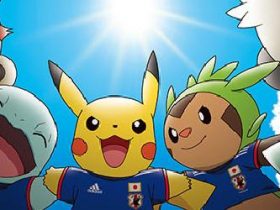 The first footage of recently announced Wii release PokéPark 2: Beyond the World has hit the internet.

A sequel to last year’s PokéPark Wii: Pikachu’s Adventure, PokéPark 2: Beyond the World will feature four-player multiplayer and is set to release in Japan this Winter. No western release has been confirmed, but I’d imagine it’ll make its way over here next year before the Wii U arrives.

You can catch the short clip below: