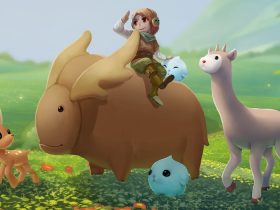 Yonder: The Cloud Catcher Chronicles Signature Edition Out Next Week

This has introduced the four B.ARK pilots – Barker, Marv, Lucio and Felicity – as well as their underwater cybernetic nemesis, the Dark Tide.

You can expect future reports to present exclusive looks at gameplay, concept art, animations, and more.

“Meet Barker! A French Bulldog from Russia, Barker may be small but he has a big heart. This pooch is innocent and loyal and he’ll do anything for his friends. Help Barker create frenemies as he transverses the galaxy to save the earth!”

“Marv is a cottontail rabbit that came to us all the way from the Nevada deserts in the United States. He’s a bit jumpy, but don’t let his nervous nature fool you. His mission in life is to overcome his fears and face the ocean onslaught!”

“Lucio is the brave leader of the B.ARK crew. A Marscian brown bear from Italy, Lucio brings a level head to the B.ARK team. His calm nature and extreme intelligence make him the perfect fit for the team’s chief space officer —a position he holds with pride!”

“And last, but certainly not least, is our fearless house cat, Felicity. Joining us from France, Felicity may be a loner, but her attitude and confidence make her a purrfect candidate for ridding the universe of cyborg sea scum! She’s not kitten around!”

In B.ARK (Bio-Interstellar Ark), you must blast through a space armada of fishy-themed enemies in this cooperative space-themed side-scrolling shoot ’em up.

It’s up to pugs, cats, bears and bunnies to save the solar system, with up to four players piloting powerful yet adorable ships in local multiplayer.

While blasting your way back to Earth to defeat mysterious ocean cyborgs and save the human race, you will have the chance to upgrade your ships at hidden shops and explore the solar system to discover a secret ending.

This cooperative experience will require communication to succeed, working together to defeat waves of enemies, rescue your friends, unlock new paths and sync your super abilities.

B.ARK will release first on the Nintendo eShop for Nintendo Switch as a timed console exclusive in late 2020.