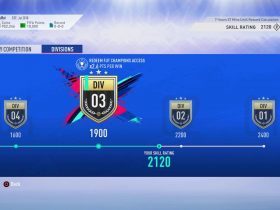 Takumi. As soon as I saw the Hoshidan prince knocking back arrows in every direction, I knew that Nintendo could be on to a winner with Fire Emblem Warriors. The skilled archer is but one of many heroes that have been pulled from across the Fire Emblem universe to charge headlong into this Nintendo Switch exclusive, that comes soon after Koei Tecmo landed the chance to stray outside The Legend of Zelda timeline with Hyrule Warriors.

With lessons learned from that experience, Fire Emblem Warriors sees developers Omega Force and Team Ninja, under watchful supervision from Intelligent Systems, successfully integrate the turn-based strategy universe with their chaotic hack-and-slash gameplay to result in a game that, in many areas, is a remarkable crossover that’s packed with a smattering of fan service.

But, it is still very much a Dynasty Warriors game that thrills in thrusting legendary heroes into the throng of battle where they are faced with overwhelming odds – only to cut down swathes of enemies in their path as they wrestle control over key locations. It’s just that this time it is heroes from the Fire Emblem series leading the charge, and the experience benefits from being underpinned with mechanics that have long been associated with it. 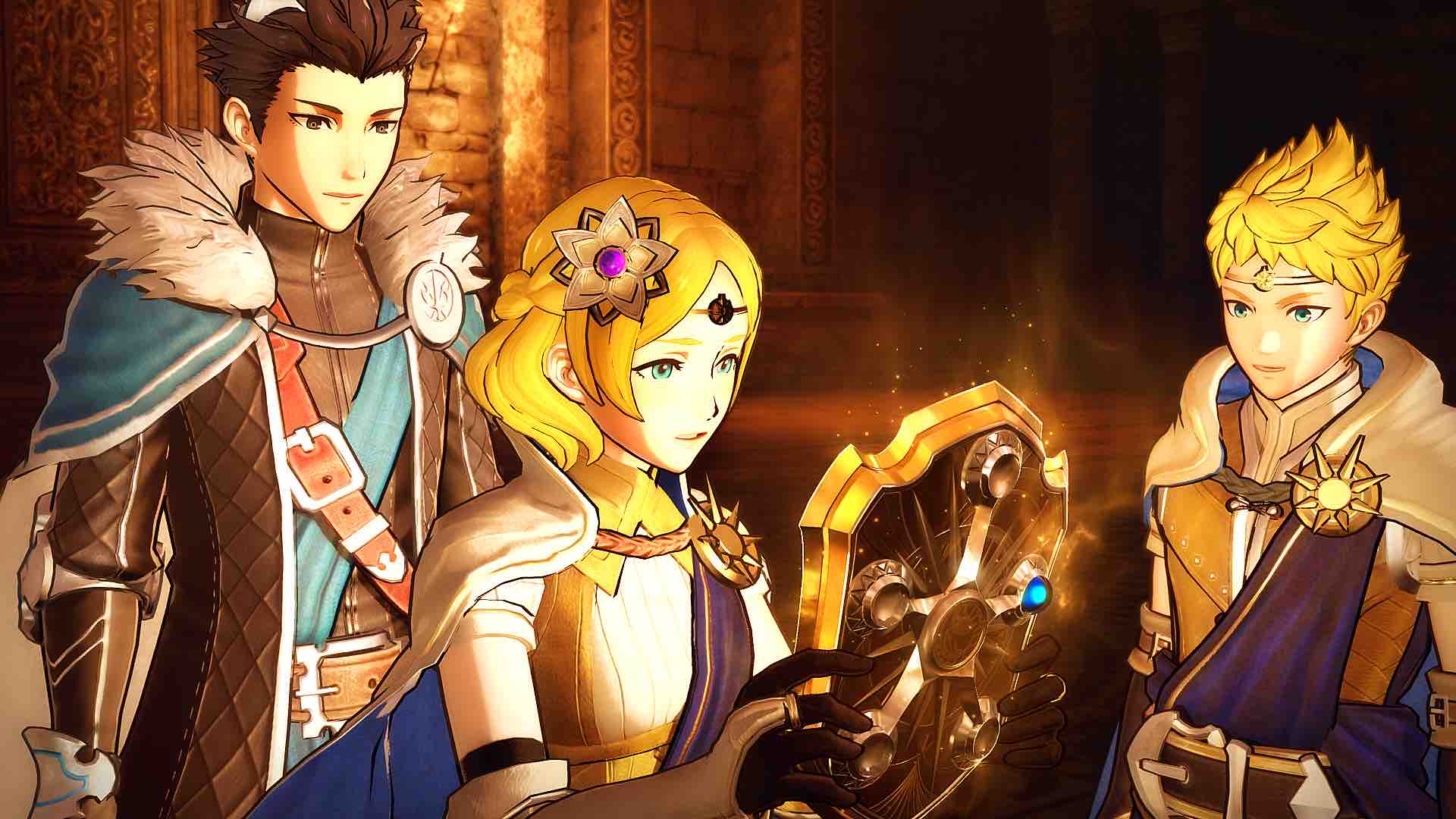 It is Story Mode that players are nudged into first, in which a nonsensical plot is woven around the player’s progression through chaptered scenario stages. When Outrealm Fiends invade their kingdom, the diligent Princess Lianna and the brash Prince Rowan escape and set out to restore the Shield of Flames in order to stop the Chaos Dragon. This requires that they collect Gleamstones that are carried by heroes from other worlds, and, well… it descends into madness from there. There’s some witty repartee in the dialogue exchanges that happen as each stage loads and particularly stunning cutscenes that you can rewatch in the Records Hall, but the melodramatic narrative never rallies enough strength thanks to its predictable twists and turns. But, being honest, I’m sure that most won’t be here for the plot.

It is stood on the battlefield where Fire Emblem Warriors enters its own. Regardless of which character you choose from an already impressive roster, basic actions see players perform combos by alternating their regular and strong attacks, dodging out of harm’s way whenever necessary, depleting a Stun Gauge to land a Critical Hit, and unleashing their Warrior Special – a powerful and over-the-top move that can be used once the yellow Warrior Gauge is filled from defeating enemies or collecting yellow recovery items.

That’s fairly standard in approach, but considerable effort has been made to differentiate each character. Not only has the whole roster been exceptionally realised, but none feel like they have been copied from one another. That’s important as the Weapon Triangle – a staple of the Fire Emblem series – has been implemented, too. That means that swords are strong against axes, axes are strong against lances, and lances are strong against swords. And, outside of that, bows being effective against flying units. This results in the roster having a fair share of characters wielding swords and axes, with bows and spellcasters thrown in for good measure. 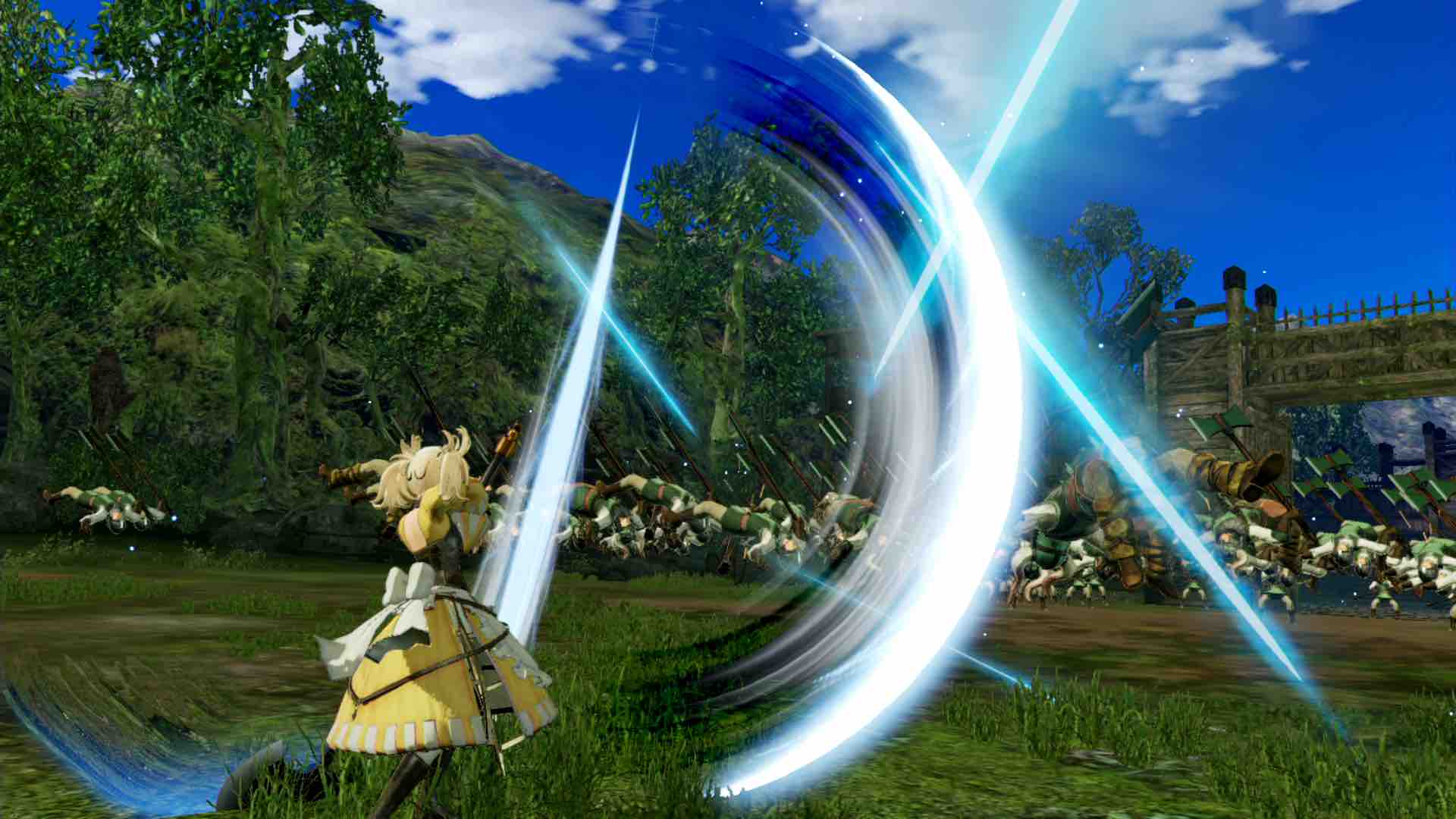 The Weapon Triangle is not something that you are expected to know about, and, handily, in battle enemies that have an advantage or disadvantage against you are marked with an upward or downward arrow above their health bar. Fighting at an advantage will see an increase in damage dealt, the Stun Gauge appearing more often, and the strength of Critical Hits become boosted, and, when fighting at a disadvantage, enemies will guard more easily, deal increased damage, and the Stun Gauge will not appear. And, this comes into play even for characters that the player is not directly controlling.

The developers have also thrown in an Awakening Mode, which, when the respective blue gauge is filled when picking up blue tonics dropped on the battlefield or attacking enemies at an advantage, can be activated when needed. This will grant an advantage against all weapons types and lends bonus rewards for those that rack up large KO counts while activated. It’s also another excuse for more excessive animations as you slaughter countless enemies, continuing to add to the thrill.

With four characters regularly placed under your control to switch between and regular cries for help whenever someone is struggling, it pushes players to rethink their strategy as each battle plays out. And then with Permadeath, for those that choose to play Classic rather than Casual, the ever-looming threat of losing a character will see you learning to react far more quickly to step in to save anyone at risk. The relationships and bonds that build between characters mean that you care far more, rather than just squarely concentrating on levelling a favourite character. That’s somewhat lost on those that choose the Casual setting, not that we can blame anyone for wanting to uncomplicate the experience in places. 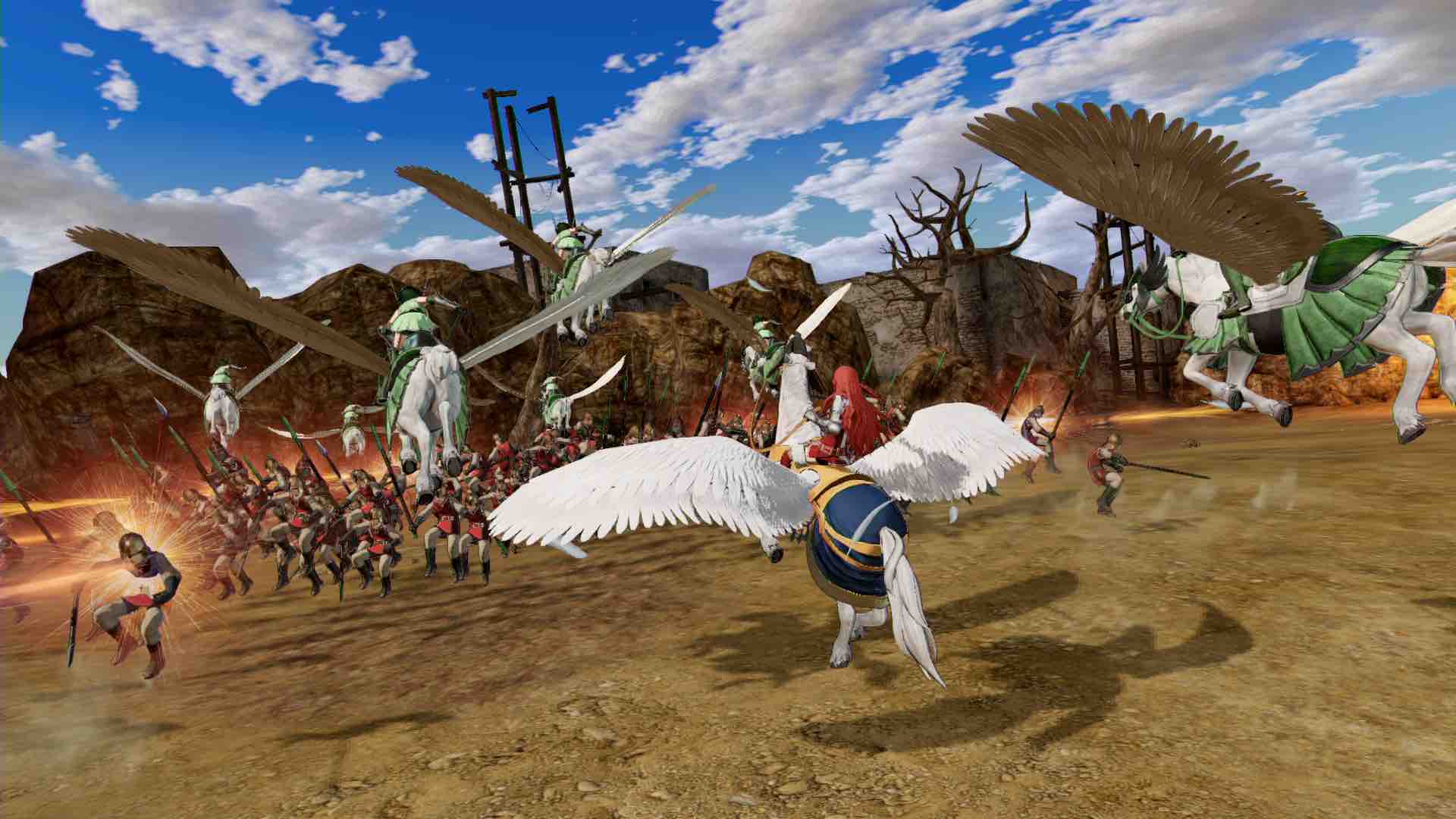 You can also choose to Pair Up characters, with one acting as Vanguard and the other being Support. The Vanguard character will receive a stat boost from the Support character, and it will also present the chance to use Dual Strike, Dual Guard, and Dual Special. Dual Strike will see the Support character attack the enemy and can break their guard, Dual Guard can automatically see your Support character defend you against an incoming attack, while Dual Special will unleash a ridiculously superpowerful Warrior Special that can take out enemies in a far larger area. It’s also a chance to continue to build their bond, which, once levelled up, will reward you with character-specific materials.

The maps themselves become increasingly complex over time, introducing flight routes, sandstorms, poison fog, Dragon Veins, and molten lava to utilise or overcome. That being said, the mission objectives that are thrown at you aren’t as imaginative. Capture this fort, now those ones, defeat this character, and don’t let this character die, these have come to be expected. Side Missions can see you rescuing a Villager or chasing down a Thief, the reward being a Chest Key that can be used to, unsurprisingly, unlock a Treasure Chest that usually contains a weapon or tonic.

The chance to give orders to any playable and non-playable character on the map screen mid-battle alleviates having to tackle these all yourself, reducing the need to abandon what you are doing all the time. The AI is surprisingly competent most of the time, meaning that after barking some orders you usually won’t have to switch away from your character to deal with it yourself. The only exception to this that I found was when you have to chase down an enemy character that’s rushing to a certain location, which are instances that you are usually better off handling. 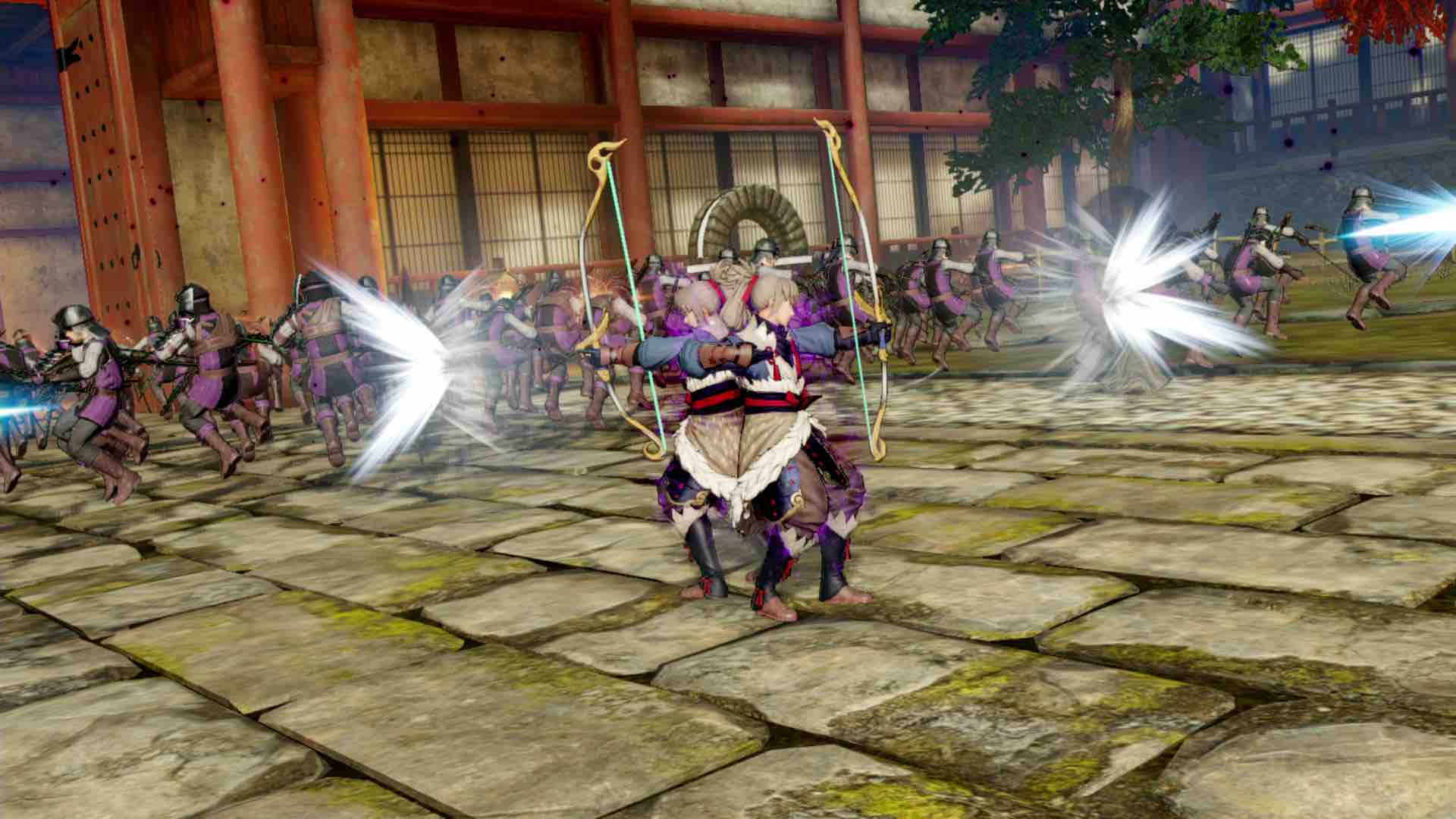 There are also Anna’s Mementos to collect, that slowly piece together a picture like Puzzle Swap in StreetPass Mii Plaza. The standard condition to make Anna appear with her wares on the battlefield is to defeat 1,000 enemies, but, once you complete Story Mode and unlock Hard and Lunatic difficulty settings, trickier conditions are thrown in such as completing an objective within a specific time limit. This will level up your Camp at regular milestones, rewarding you with the chance to use more blessings at the Temple – that can temporarily boost the amount of experience that is gained, improve the quality of weapon drops, and more.

The Camp is where players will strengthen their units and weapons, in which Crest Market will see you use gathered materials to create crests for each separate character that can lengthen combo chains, reduce the damage received from specific weapon types, or boost a character’s strength. And then there’s the Smithy that lets you reforge, appraise and sell weapons, the Training Grounds where you can pay gold to boost a character’s level, and the Temple, as mentioned before. There are no real surprises here, aside from being able to revive allies at the Temple.

And, then there’s History Mode. This is easily where Fire Emblem Warriors shines brightest, and provides players with the chance to revisit classic scenes and battles from past Fire Emblem games. The player can choose to attack any enemy character positioned on a 2D sprite-based scene before them, with each encounter presenting a normal 3D battle with specific rules. That includes Timed Onslaught, which challenges you to defeat as many enemies as possible within a given time limit, Ally Rescue, where you must save stranded allied troops, and Arena, where the player must fight through six battles against increasingly trickier opponents. With Story Mode tinged with disappointment, History Mode becomes the game’s saving grace and a far more interesting collision between the two series. 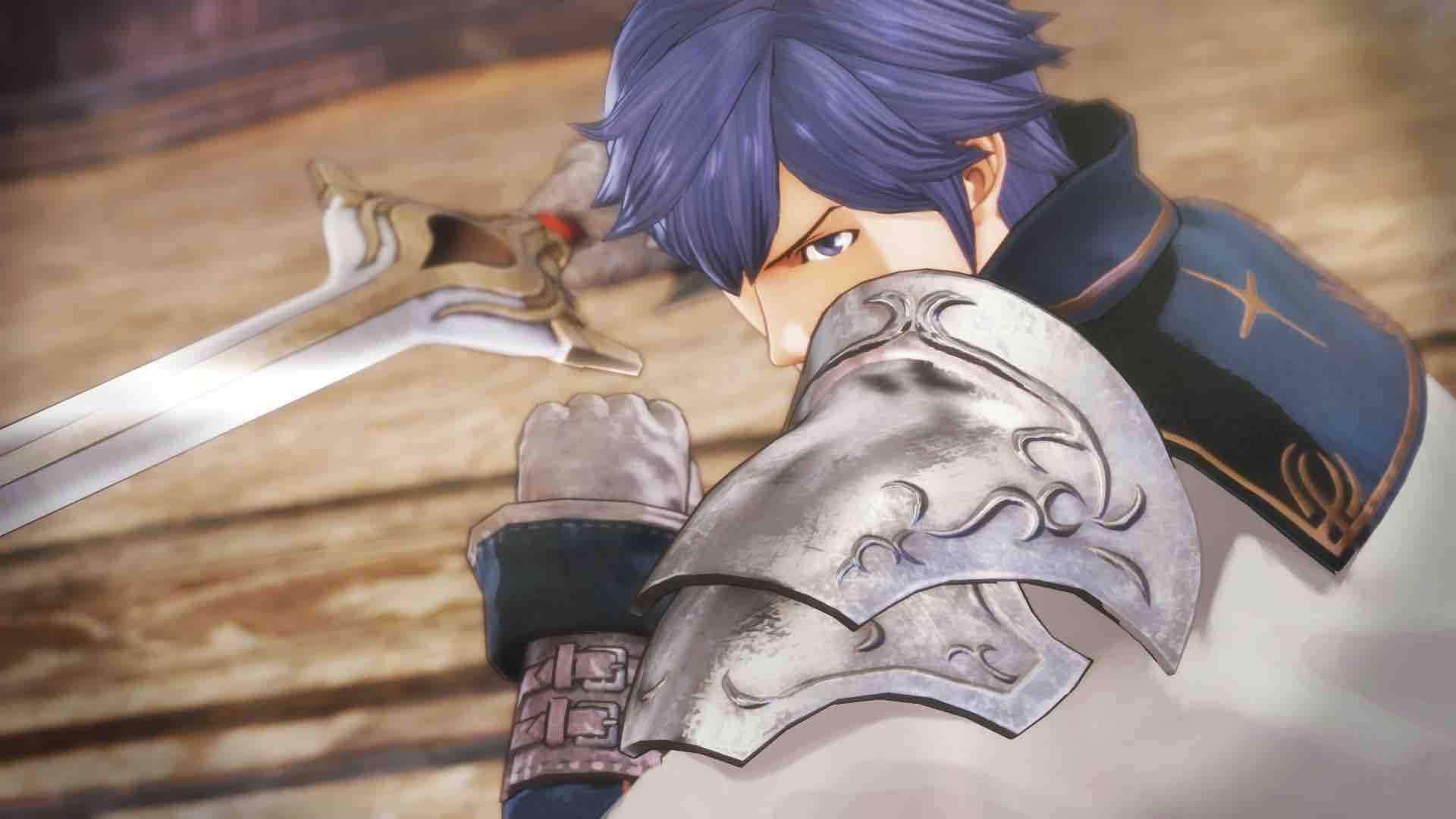 Fire Emblem Warriors becomes the first Nintendo Switch game that presents the player with the chance to choose between different performance settings, too. Head into the Game Settings and you can decide whether the game is optimised for Quality or Performance, which, in less ambiguous terms, will see it run at 1080p with 30 frames-per-second or 720p with 60 frames-per-second. The difference is notable, and the option will be welcomed – leaving it to the player’s own preference in whether to prioritise better graphical fidelity over smoother animation.

I preferred Quality, a choice that markedly accentuates the cel-shaded aesthetic and still means that you can carve a bloody path around the battlefield without any trouble. The art direction regularly impresses at every turn even if the environments can feel plain, but, as always, that’s a necessary sacrifice when there is so much else is happening on-screen. However, throw in a second player at any point and Performance is certainly your best option.

amiibo support lets you scan five different amiibo per day to receive a present for each. This can be gold, weapons, or materials, with the Fire Emblem amiibo having the more lucrative rewards. Given the steady stream that you receive through standard play, these come as a bonus more than anything.

Fire Emblem Warriors charges headlong into battle with assured confidence, bolstered with a roster of heroes that effortlessly translate to Dynasty Warriors’ lust for over-the-top action. Your quest to save the kingdom of Aytolis may not find similar strength, but History Mode is resolute in wanting to captivate your attention for hours on end. For that, those that long to rack up ludicrous kill counts in the midst of battle will savour the thrills that this Nintendo Switch exclusive presents.