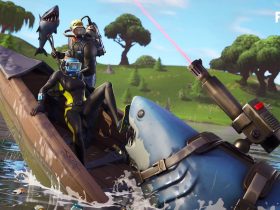 FIFA 18 was released on Nintendo Switch last week and, while sinking time into the world’s game over the weekend, players have started to encounter unexpected glitches.

The first, which YouTube user Snorth93 has recorded, sees the faces for a team not load correctly, instead left with a blue and green checkboard pattern. In the comments, another player reported encountering the same problem with teams such as Newcastle, Crystal Palace, Brighton, and Portugal meaning that it isn’t isolated.

Reddit user boldervine shared the second, perhaps more troubling, glitch. It sees every player as well as the officials that surround the pitch appear as blocky black stick men, after which their character models slim down slightly.

Asked whether it was real or fake, boldervine replied: “It’s real and it was a random bug. other than this I’m loving the game and I’ve been playing FIFA/PES for 20 years now. No regrets.”

FIFA 18 on Nintendo Switch is a “custom built” experience that has been worked on at developer EA Bucharest, with producer Andrei Lăzărescu explaining that it should be seen as a “foundation” to build on as well as more passionately expressing that it shouldn’t be seen as “a sh***y, second-rate game.”