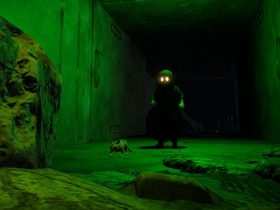 Jump Scares Await In Kaet Must Die! On Nintendo Switch

RecoTechnology has confirmed a release date for 1971 Project Helios on Nintendo Switch.

With firearms and vehicles having become scarce, conflicts have no end and the freezing cold annihilates friends and foes alike.

In this frozen world, eight people – each with their own problems and interests – forge a temporary alliance to locate Dr Margaret Blythe.

Kidnapped by a massive stratocracy, their efforts to rescue her will see them travel and fight shoulder-to-shoulder.

They must avoid raider attacks, investigate military headquarters, and infiltrate the territory of a dangerous anti-technological religious sect.

The strategic and personal decisions you make will determine which one of three possible endings your characters will reach.

1971 Project Helios will release on the Nintendo eShop for Nintendo Switch worldwide on 9th June 2020.