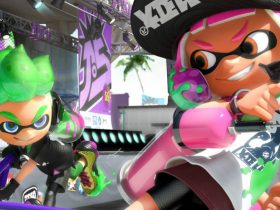 Players can participate in an Arcade Mode with illustrated narrative bookends, a Boss Rush Mode that allows players to draft their own deck of powerups against progressively powerful opponents, and Ranked Mode with built-on-the-fly tournaments and 3-on-3 team battles.

There are also four Survival modes, a once-per-day Daily Challenge Mode, and local and online Versus mode – supported with “best-in-class GGPO networking technology for a fast and responsive online experience.”

In Fantasy Strike, there is also a visual display of “frame advantage.” This uses graphical effects to communicate which player will recover first after every hit and in how much time – helping players to think strategically.

“Part of that is on our technical implementation of networking which somehow allows me, in California, to play my friend in Tokyo and have it feel totally responsive and smooth. The other part is modernizing the genre conventions for user interface so it’s just a single click to challenge a friend online and a single click to watch any friend’s match.”