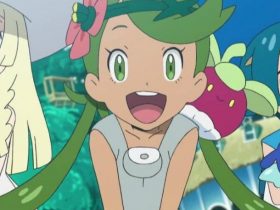 Blistering speed, spinouts and nail-biting manoeuvres. Formula 1 is admired the world over as being one of the most unpredictable, electrifying experiences around, and gamers have long yearned for the opportunity to sit behind the wheel of some of the most exhilarating vehicles imaginable.

Codemasters, having accumulated a wealth of experience in the genre, duly delivered, and have since retained a lineage of success in providing fans with the definitive gaming equivalent of the world’s most popular motorsport. Such pressure now falls to Sumo Digital in ensuring that this is sufficiently translated to Nintendo’s latest handheld, yet can the Nintendo 3DS version achieve pole position or are we left waving a yellow flag?

If there’s one thing F1 2011 doesn’t lack upon immediate impression, it’s enough content for you to sink your teeth into. Quick Race and Time Trial are clearly geared for short burst play on the go, the latter seeing the player challenged in attempting to earn bronze, silver and gold trophies across the game’s nineteen circuits.

You are also free to play a single Grand Prix weekend or take part in a Championship in the shoes of your favourite driver, yet it is Career mode, however, that will become a centre point for most players – allowing you to not only place your very own customised racer into the game but being perfect for those keen to rise through the ranks from a newcomer to a renowned pole position achiever. 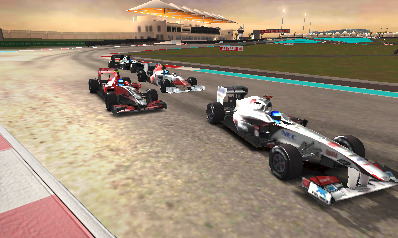 The start of such career will see you receive invites from both Team Lotus and the HRT F1 Team to attend a test session, at which you must demonstrate your prowess on their respective track in either company’s latest car model. A successful session will then see you granted the opportunity to join the team, with whom you will drive on behalf of throughout the forthcoming season, where you can expect to be pitted head-to-head with the very best names in Formula 1.

Codemasters’ exclusive worldwide agreement with Formula One World Championship Limited ensures that the player is granted an authentic experience, enabling the game to include official teams, drivers and courses – early circuits will see you speed around Melbourne, Kuala Lumpur and Shanghai, with others such as Monza, Suzuka and New Delhi appearing later in the season before culminating at Sao Paulo.

Each will see you able to participate in warm-up sessions ahead of qualifying, and the beauty here is that these aren’t compulsory and may be skipped entirely for those wanting to begin the full race itself straight away. However, this will place you at the back of the starting grid with a more immediate disadvantage and in a less opportune position to outpace and snake past your competitors.

Post-race sees your in-game inbox flooded with feedback from the press regarding your performance, outlets such as Grease Monkey Mag and Paddock Press praising or shaming your driving abilities – such articles even including taunts from rivals where appropriate. 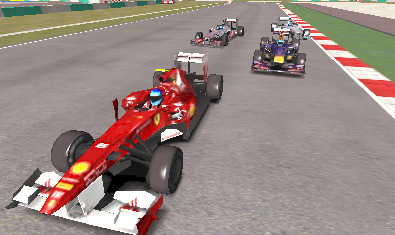 You’re also free to check current standings, previous results, your calendar and player status, where you can view statistics such as your current reputation as well as total wins, pole positions, podiums and more.

A similarly impressive mode is Challenges, where the player finds their driving skills tested to their very limits. There are sixty in total, ranging from checkpoint races to circuits cluttered with obstacles, the player required to drive well to be awarded a high rank so that they can unlock additional challenges to attempt.

Driving is particularly balanced, an essentially key aspect to any racing experience, and is adjustable entirely to the skill of the player. A series of ‘Driving Aids’ ensures this, providing a number of options for the player to receive as much, or as little assistance, as they’d prefer. These encompass the usual parameters, such as opting for manual or automatic gears and a racing line that provides a visual guide as to the speediest way around the circuit, which coincides with more significant aid including steering assist, predictive braking, anti-skid and anti-wheel spin.

Those looking to test themselves will, of course, choose not to make use of these, but they will inevitably be of use for those with less confidence in their driving abilities. 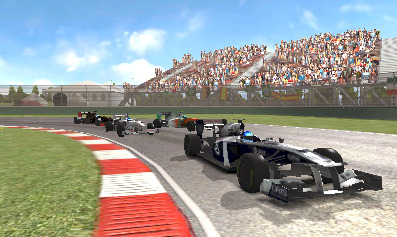 The player is also able to implement the use of Kinetic Energy Recovery System (K.E.R.S) and DRS, adding strategy to your driving experience as you make the best use of them to gain those extra few valuable seconds on the clock.

Weather also comes into play, with wet conditions negating a more steady approach, and damage system has also been implemented, causing loss of control to your vehicle if you choose to drive recklessly – colliding with racers and track alike. Whilst this results in no real visual alteration, the consequences in terms of car performance will certainly mean you’ll wish to drive sensibly to maintain your position.

Sumo Digital has made a commendable effort to incorporate multiplayer, allowing for both local and online play. Here, you’ll be able to engage in three modes; Race, Time Trial and Constructor Face-off, each able to be enjoyed by up to four players. Whilst Race and Time Trial are self-explanatory, Constructor Face-off sees players divided into two teams of two (AI racers taking the place of any missing players) that compete across a set of races as they aim to achieve the highest amount of points to claim victory.

StreetPass has also been utilised, although in basic form – players being able to share fastest lap times with one another, which is a nice addition but something that could have been developed further.

It isn’t all plain sailing for F1 2011 though, with the game’s frame rate suffering considerably when a vast number of cars are on-screen at any one time whilst the stereoscopic 3D is in use. This is particularly problematic when you’re sat amidst the starting grid of twenty-four cars, the game struggling to cope until the player flicks the 3D Slider to the off position.

It is a shame, as the 3D effect works particularly well in adding visual depth to your surroundings and providing enhanced definition to the player’s car. Racing alone, or with fewer numbers, you can, fortunately, enjoy this, but for those frequent times in which you’ll find yourself racing against larger groups of competitors, you’re forced to ignore it to ensure you can drive consistently.

Nevertheless, F1 2011 offers pure, unadulterated simulation racing, housed within a particularly well-varied portable package. Carefully catered to all audiences, whether you’re a seasoned Formula 1 fan or not, this is a credible racing title that continues to expand upon Codemasters’ continuing dominance in the racing scene.