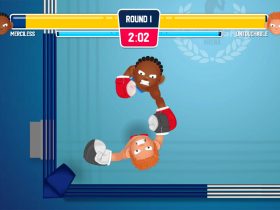 Enter The Ring In Boxing Champs On Nintendo Switch Next Week

Team Reptile has confirmed a release date for Megabyte Punch on Nintendo Switch.

This electro beat ‘em up game is set in a computer universe in which you must protect the Heartcore of your village.

To defend your people from the Valk Empire and the dreaded Khoteps, you will travel through six electro-worlds that each has three stages and their own boss fight.

The parts that you recover from the creatures that you defeat have their own powers and bonuses, such as gun arms that unlock a shoot ability to powerful hips that let you perform a devastating pelvic thrust attack.

There are 150 parts to retrieve, resulting in “endless combinations” for you to customise your fighter with.

You can also choose to play the whole adventure in local co-op multiplayer with up to four players, or step into a destructible arena in versus mode to compete against one another.

The game comes to the portable home console with two exclusive bonus stages and the chance to scan any amiibo in-game to unlock exclusive colours for your fighter.

Megabyte Punch will release on the Nintendo eShop for Nintendo Switch worldwide on 8th May 2020.