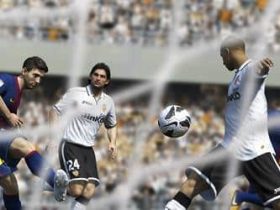 FIFA 13 was a commercial disappointment on Wii U

EA Sports have today announced that they have extended their licensing agreement with the Fédération Internationale de Football Association (FIFA) until December 31st 2022.

This means that the company retains their exclusive rights to release FIFA-branded action and management videogames, alongside the official FIFA World Cup videogame and its status as a Presenting Partner of the FIFA Interactive World Cup.

“Our franchise has become the benchmark for quality and innovation in the sports videogame genre, and we look forward to many more years of connecting with consumers around the world with our games carrying the prestigious FIFA name.”

“Our relationship with EA SPORTS is of high importance to FIFA,” adds FIFA secretary general Jérôme Valcke. “The FIFA videogames are a key experiential component in our work to communicate the FIFA brand and its values all over the world.

“This is highlighted by the 2.5 million football fans that have competed in this year’s FIFA Interactive World Cup, which is just one example of the power of our partnership with EA.”

Burnout Paradise Remastered Out On Nintendo Switch This June