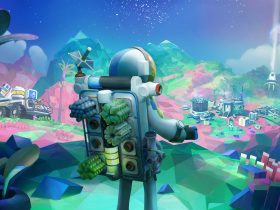 Astroneer Rated For Nintendo Switch By The ESRB

Nintendo Switch has sold more than 36.87 million units worldwide, but, given that success, Electronic Arts hasn’t thrown their development talent behind the portable home console.

We now know that there’s a reason for that, though. After an analyst suggested that The Sims would be a great fit for Nintendo Switch during the company’s first quarter earnings call this week, EA CEO Andrew Wilson shared that they “have a lot of data” that shows that most players own other platforms that they would prefer to play the company’s games on.

“Any time we’re evaluating platform conversations, we are really looking at a couple of things,” Wilson explained. “One, does the game really fit the profile of that platform in terms of the control or the community ecosystem? Two, do we think the community playing on that platform would appreciate the game to go there? Or would they prefer to play it somewhere else?

“We have a lot of data that would suggest a great many Switch owners also own a PlayStation 4 or an Xbox One or a PC and very often choose to play the games that we make on those platforms even though they have a Switch and they enjoy a lot of great content on the Switch. And so there’s always an evaluation process that goes on a case-by-case basis.”

That’s baffling. This statement suggests that EA isn’t supporting Nintendo Switch with more games simply because their data shows that most players own other platforms.

That’s an understandable business decision, but Wilson’s comments fail to address the fact that the company isn’t offering players the choice to play their games on Nintendo Switch.

Even more so, without releasing those same games on the console, how can the company adequately understand the success and market share that they would attract on it?

There are technical reasons for that, of course. But, aside from the upcoming FIFA 20 Legacy Edition
and a “distinctive team-based action game” from Velan Studios, the third-party publisher has only released four other games on the console since launch: FIFA 19, FIFA 18, Unravel Two, and Fe.

This doesn’t mean to say that The Sims series could never come to Nintendo Switch, but, for now, EA is happy with how that brand is performing on other platforms.

Wilson adds: “And I wouldn’t say that The Sims would never go to the Switch, but I think we’re doing really, really well attracting [The] Sims players. As we said, we did the promotion in the last couple of months and brought in 7 million new [The] Sims players that we expect will engage in that community on a platform that is really tailored to user-generated content, creativity, and customization.”