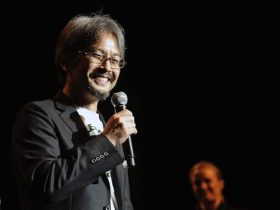 2D sprites were converted into 3D models using a Python script, while the defunct NES Zapper was replaced by the Razer Hydras as the controller.

“So, this year at Global Game Jam, I decided I wanted to do something with VR,” Delgado wrote in his postmortem. “I’ve had an Oculus Rift DK2 for a while, but I never really got around to using it. I sat down for about 24 hours and made a fun little retro throwback to Duck Hunt on the NES.”

He goes on to share his interest in how 3D voxels appear with pixel art, the challenges with hand tracking in VR, and how he approaching implementing gameplay mechanics.

The whole experience has only spurred his interest in VR, Delgado concluding that he will buy an HTC Vive at launch and continuing developing for the new technology.