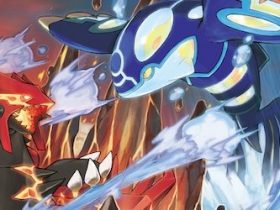 Square Enix have today announced that they are to release a new entry in the Dragon Quest Heroes: Rocket Slime series for Nintendo 3DS.

To be titled Slime Mori Mori Dragon Quest 3: Daikaizoku to Shippodan in Japan, the announcement was accompanied by the unveiling of an official website for the game.

Providing more information about the game, the site details that it is to be an action-adventure game with a multiplayer mode the supports two to four players, alongside 3D support and compatibility with Wi-Fi and SpotPass.

Players will be able to head out to sea, build their own ships and engage in ship-to-ship battles, fitting the “Kaizoku” part of the name which translates to “pirate.”

Slime Mori Mori Dragon Quest 3: Daikaizoku to Shippodan is set to release in Japan during Winter 2011, with no word on a western release.

[Thanks Andriasang, via Official Nintendo Magazine]