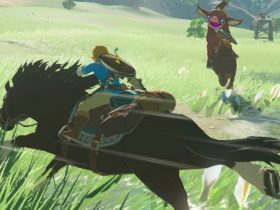 Manaka Kataoka Is Lead Composer For The Legend Of Zelda: Breath Of The Wild

With the free Knickknack Pack out on July 26th, there will be three paid downloadable content packs – the Hotto Stuff Pack (July 26th), Aquarium Pack (August 2nd), and Modernist Pack (August 9th) – that can be bought separately, or together as a Season Pass (€20.99).

Hotto Stuff Pack
Release Date: July 26th
Price: €5.99 ($5.99)
This pack includes more than 40 recipes to design and decorate structures that look similar to The Hotto Steppe – a popular resting area in a distant land where visitors take a sweat break from their weary travels. Players will also get access to an additional island to gather material that they’ll need to build these recipes.

Aquarium Pack
Release Date: August 2nd
Price: €9.99 ($9.99)
Check the mailbox on the Isle of Awakening to discover a fishing island with a net full of quests and characters to meet. Learn how to catch 40 different fish that can be added to a DIY aquarium. Unlock the fishing rod as well as customization options, including swimwear, straw hats, and a ponytail hairstyle.

Modernist Pack
Release Date: August 9th
Price: €9.99 ($9.99)
This pack includes more than 70 different recipes to construct modern-looking structures, as well as additional hairstyles and clothing. Players can take their architectural skills to the next level by building a fashionable luxury hotel.

Dragon Quest Builders 2 will release for Nintendo Switch in Europe and North America on July 12th and is now available to pre-order on the Nintendo eShop.