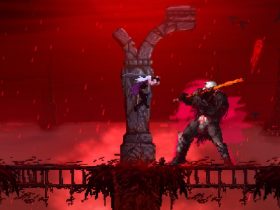 Slain: Back From Hell Wii U Port In Doubt After “Weak” Sales On Platform

Inti Creates has announced that their 2D side-scrolling dark fantasy action RPG Dragon Marked For Death has been delayed into January 2019.

The news was shared at an Anime NYC panel, where it was revealed that the game would be sold as two separate packs ($14.99 each).

The Frontline Fighters pack will have the Empress (DPS) and Warrior (Tank) characters, which are more suited to beginners. Whereas the Advanced Attackers pack contains the Shinobi and Witch characters, that, in contrast, are more technical characters that are geared towards more advanced players. You can choose whichever pack you prefer, with the option to then buy the other as downloadable content if you wish.

Inti Creates has also teamed up with Nighthawk Interactive to release Dragon Marked for Death at retail, that, coming with both packs, will arrive as close to the digital release as possible.

Whether solo or with up to four players in local or online multiplayer, in Dragon Marked for Death you play as the Dragonkin, four characters that have forged a pact with dragons that has seen them be rewarded with special powers.

Each character has their own strengths and abilities. The Princess is a well-balanced DPS character, the Warrior a Tank class character that protects the party with his high defence, the Shinobi is another DPS character that places an emphasis on movement and tricky attacks and the Witch can both heal her allies and damage her enemies.

You must work together with your companions to topple gargantuan bosses that are bigger than the entire screen, something that makes this sound like an experience that you won’t want to brave alone.

Dragon Marked For Death will release on the Nintendo eShop for Nintendo Switch worldwide on January 31st, with a physical release to follow.