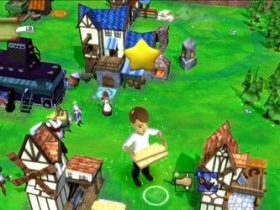 Nintendo characters surely can’t face anything worse than having their birthday celebrations ruined. The Year of Luigi may have concluded without a hitch, but even Donkey Kong’s lone birthday candle finds itself suddenly extinguished by a snowflake in the wake of an advancing invasion by the Viking-inspired Snowmads of the North Sea. With Donkey Kong Island becoming encased by chilly arctic winds the Kong family have swept away from their tropical paradise, their immediate goal to therefore bound across the nearby isles to retake their home from the icy invaders.

Still, in danger of forever being remembered as the E3 2013 game announcement that wasn’t another Metroid Prime, this sequel of sorts to Wii’s Donkey Kong Country Returns is an energised jungle romp that successfully builds on the enviable foundation that Retro Studios laid within Donkey Kong Country: Tropical Freeze‘s predecessor.

Whilst it was Donkey and Diddy that worked together to thwart the hypnotic Tiki Tak Tribe in their last adventure, Donkey Kong Country: Tropical Freeze enlists additional Kong family assistance from the hair-whipping Dixie and the elderly, cane-bouncing Cranky. Together you’ll go up against the Snowmads hordes of walruses, owls and penguins, and, in an industry increasingly dominated by more gritty settings, Donkey Kong’s world miraculously beams with a kaleidoscopic vibrancy that rivals even November’s Super Mario 3D World. 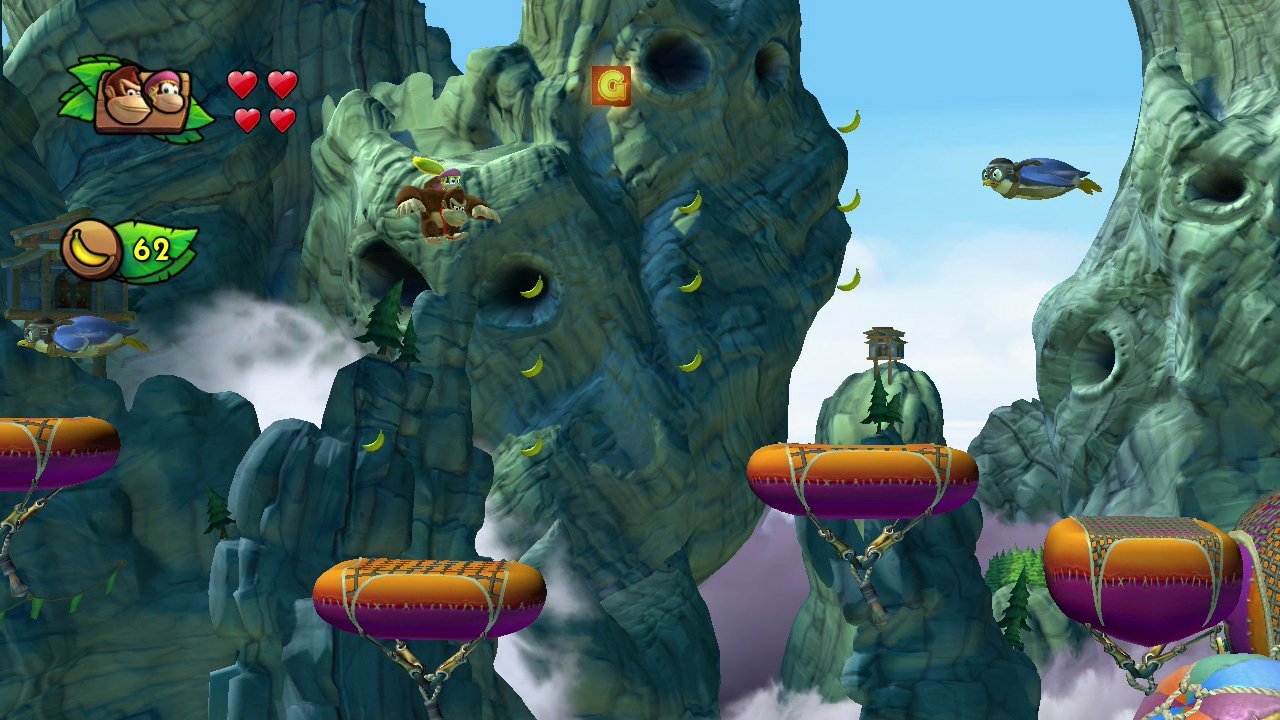 Whether fleeing from an enormous squid in the murky underwater depths, joyously bouncing along cuboid jelly pieces, or blasting your way through canyons in Barrel Cannons, there’s welcome variety between levels that will always leave you curious as to what the next will bring. End-world bosses themselves are clear highlights spread throughout the spectacle, the more boisterous foes being provided as much character as the rest of the cast with some equally perplexing strategies required to topple them. Throw in Mine Carts, Rocket Barrels, the formidable Rambi the Rhinoceros, and Retro Studios new dynamic 3D camera, and this is a fruity concoction that delivers plenty of stand-out moments.

As has become standard for the series, sweeping through each level will see you hoarding Banana Coins whilst hunting out KONG letters, Puzzle Pieces, and hidden bonus stages scattered throughout. Completing any level will unlock Time Attack mode supported by online leaderboards, whilst multiple secret exits mean that you most likely won’t have seen everything that Donkey Kong Country: Tropical Freeze has to offer by the game’s thundering conclusion. Even then, a Hard Mode is also waiting to be unlocked once you clear all hidden levels, seeing you tackling levels with only one heart and no checkpoints.

Donkey Kong naturally remains the core character, his bulky stature seeing him lumber through the game’s leafy ravines with roll attacks, pounding the ground to stun enemies, and swinging through vines. It’s the three buddy partners that elevate this, with Diddy’s Barrel Jet, Dixie’s golden ponytail and Cranky’s cane each opening up their own strategies for tackling everything that’s thrown at you along the way. 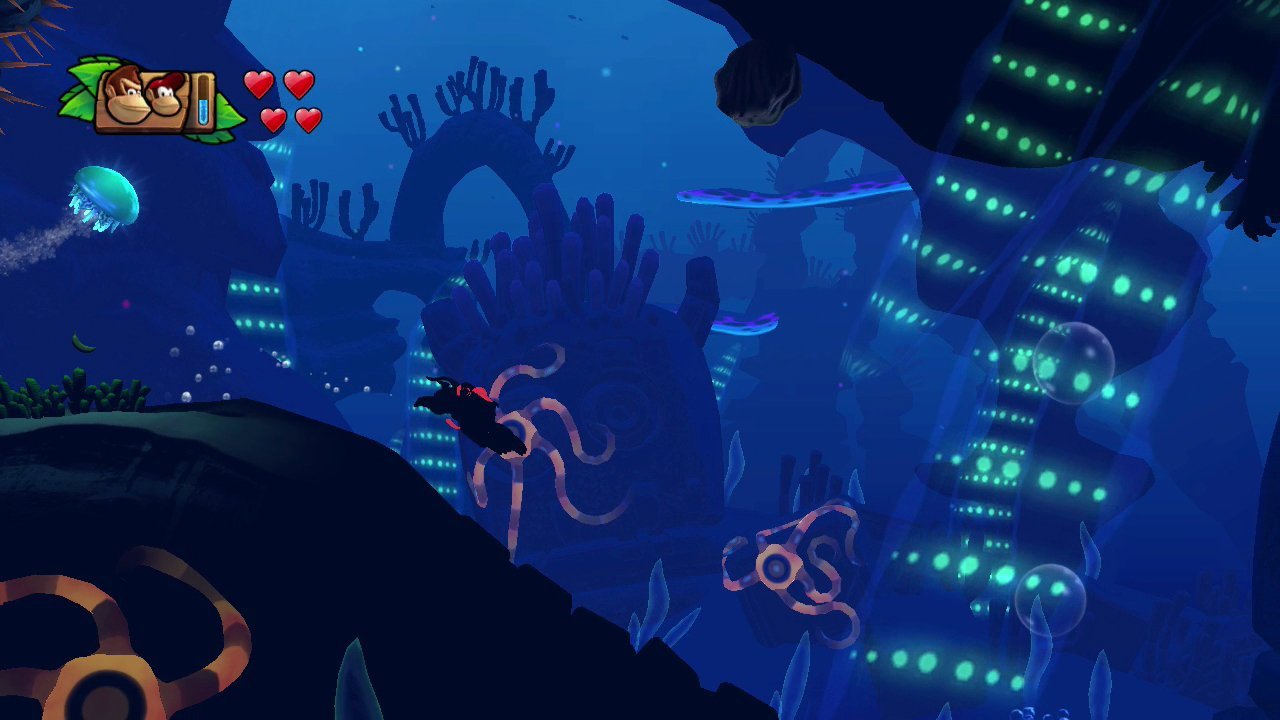 The cane in particular, reminiscent of that owned by Scrooge McDuck, allows you to bounce to greater heights whilst also letting you safely traverse spikes and thorny patches. Dixie’s Helicopter Spin provides a useful lift at the end of jumps to swing you to out of reach ledges, whereas Diddy’s ability lets you hover which I more often than not found myself using to dodge incoming danger.

A new addition to Donkey Kong Country: Tropical Freeze is the riotous Kong POW move, for which players must first collect bananas to fill an on-screen meter. Once full this can be unleashed, turning all on-screen foes into items that can be collected – those appearing dependent on which partner character you currently have.

Multiplayer’s a different story, introducing a second player to help tackle the Snowmads. This sees each player left with separate health and air meters, either playing independently of one another or the second player clambering on to Donkey Kong’s back to co-operate – also employing long-range attacks in support such as Diddy’s peanut guns. Working together requires more coordination, but can open the game up to increased hilarity by mistiming their efforts causing you to tumble down down a nearby pit. If pushed off-screen from the other player you will be shortly beamed after them, whereas losing a life sees you placed in a floating barrel that must be smashed for them to return. It’s that unique enjoyment that local multiplayer can provide, even though our desire for Nintendo to realise that an online alternative is needed still remains.

Funky Kong replaces Cranky as the family member selling their wares to help you on your quest, his Fly ‘n’ Buy pop-up stalls appearing on each island. Whilst his support items aren’t a necessity to complete the game, they can help to ease off the many tricky moments that are thrown at players throughout. Red, Blue and Green Balloons respectively provide extra lives, automatically refill your air meter underwater, and save you from falling down the game’s many pits, whereas Portable Barrels let you summon your chosen buddy partner at whim. 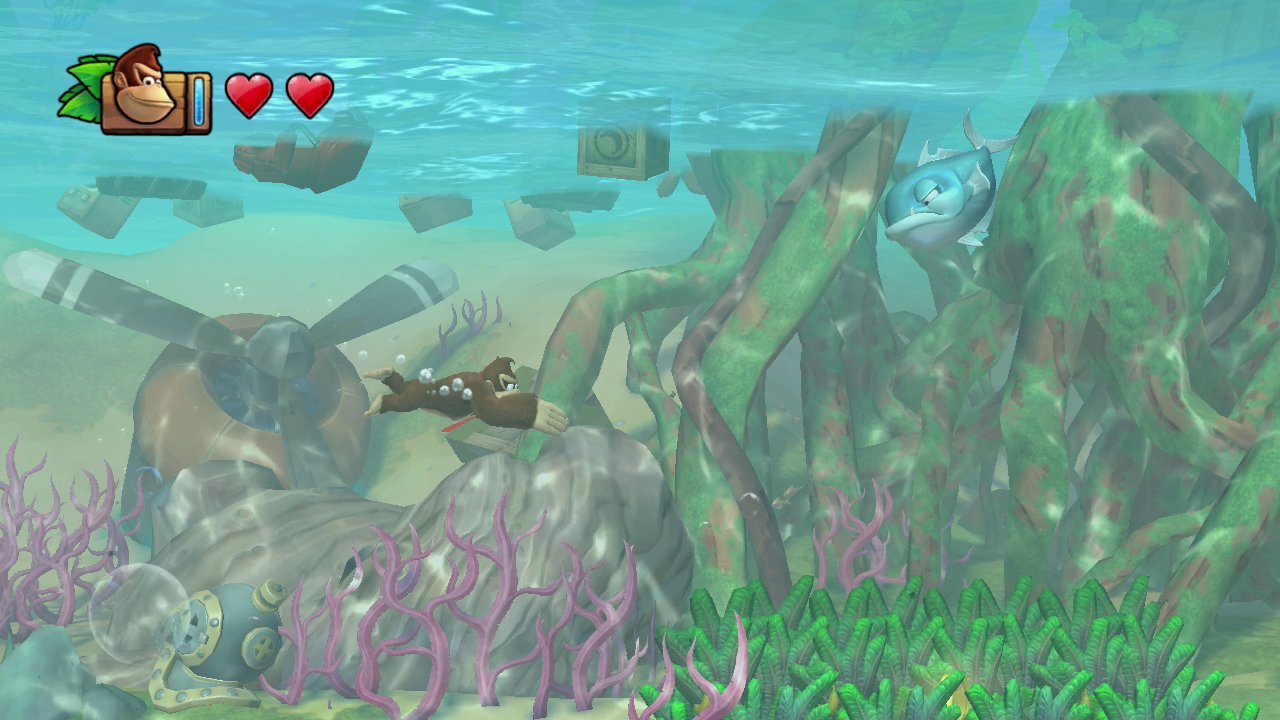 Meanwhile, the Heart Boost extends the hits you can take before losing a life, Banana Juice grants temporary invincibility, Squawks alert you to nearby puzzle pieces, and the Crash Guard protects you from the first damage that you take whilst riding either a Mine Cart or Rocket Barrel. It’s a well-varied mix that covers all troublesome angles, and any spare Banana Coins can be spent on a Capsule Toy Machine that sees you collect randomised Donkey Kong-themed figurines.

It is meticulous attention to detail that truly brings Donkey Kong’s world to life. The painstaking art direction is accompanied by an intricate level of animation, layered levels doing much to decry the game’s otherwise core 2D side-scrolling design. Silhouetted levels make a triumphant return (running through a burning forest is one of the more artistic if not slightly harrowing representations) easily been one of Returns’ most striking highlights, underwater sections show that even apes can be graceful swimmers, whilst the Kong’s lifelike fur screams realism in an otherwise cartoony world.

The return of Donkey Kong Country composer David Wise, working alongside Kenji Yamamoto, delivers a spellbinding soundtrack that delves into new and old tracks alike. Hidden Gramophones await discovery that churns out Wise’s classic 16-bit melodies from the SNES era, whilst the new compositions themselves do much to match the thrills of the Kong family’s crazed quest.

With Nintendo having last month admitted that they had not done enough “to fully communicate the value of the GamePad,” as 2014’s lead Wii U exclusive it is the lack of integrating the console’s controller that becomes Donkey Kong Country: Tropical Freeze‘s most glaring omission. We’re instead only left with Off-TV Play, partly understandable when considering that Donkey Kong is trickier than your standard Mario fare but inexcusable in a game that should be continuing to show the reasons behind Nintendo’s hardware choices.

As a whole, Donkey Kong Country: Tropical Freeze is as solid as its star’s muscular physique. It is a lack of daring in not willing to approach the Wii U GamePad that makes it feel somewhat safe, but that’s perhaps up for debate with this being an experience that can equally hold its own without needing to – those that enjoyed Returns will find little to be disappointed with here. Donkey Kong once again responds to the call of the jungle drum, rampaging through a game filled with sensational thrills that Wii U owners most certainly shouldn’t be without.