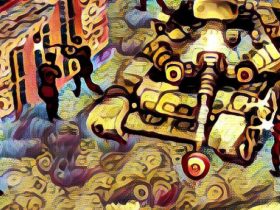 Tank It! Guns For Nintendo NX Release In 2017

Microsoft and Sony’s respective Durango and Orbis projects are “in a completely different league” to Wii U, according Digital Foundry’s hardware expert Richard Leadbetter.

Having gotten hold of reverse-engineering photography from Chipworks, he was able to assess the console’s horsepower – superior than initial estimations in E3 2011, yet not enough to rival forthcoming competitor platforms.

“It was ballpark speculation at the time based on what we had eyeballed at the event [E3 2011], but the final GPU is indeed a close match to the 4650/4670, albeit with a deficit in the number of texture-mapping units and a lower clock speed – 550MHz,” Leadbetter explains in his report.

“AMD’s RV770 hardware is well documented so with these numbers we can now, categorically, finally rule out any next-gen pretensions for the Wii U – the GCN hardware in Durango and Orbis is in a completely different league.”

He continues, “However, the 16 TMUs at 550MHz and texture cache improvements found in RV770 do elevate the capabilities of this hardware beyond the Xenos GPU in the Xbox 360 – 1.5 times the raw shader power sounds about right.

“1080p resolution is around 2.5x that of 720p, so bearing in mind the inclusion of just eight ROPs, it’s highly unlikely that we’ll be seeing any complex 3D titles running at 1080p.”

Whether this is truly cause for concern remains to be seen, but with an expected PlayStation 4 reveal on February 20th we’ll certainly know soon enough.