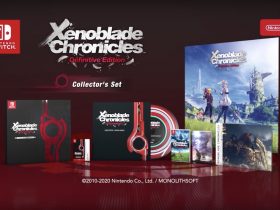 Wild Rooster has announced that Dig Dog will release on Nintendo Switch this week, an action roguelike platformer in which you play as a small dog who searches each level for a bone.

Set in a strange abstract world inhabited by creatures of the night, you must run, dig, jump, stomp and dash to forge your own path as you creatively tunnel through every level.

There are two modes to play, with Bone Hunt seeing you dig for bones in four worlds of increasing difficulty. Whereas Free Dig is an endless digging experience with infinite levels, minor challenge, and no game overs.

The game’s solo developer, Rusty Moyher, suffers from repetitive strain injury in his hands that limit how long he can use a keyboard and mouse.

And then the art was, rather remarkably, drawn using a hat with a reflector combined with an infrared camera to control the mouse.

Dig Dog will release on the Nintendo eShop for Nintendo Switch worldwide on April 26th.