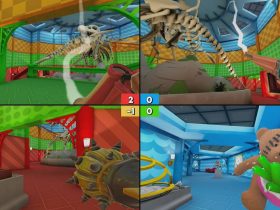 Cheat To Win In Screencheat: Unplugged On Nintendo Switch This Week

Wired Productions and KeokeN Interactive have revealed that Deliver Us The Moon will release on Nintendo Switch.

This Unreal Engine 4-powered game is set in an apocalyptic near-future where Earth’s resources have been depleted and humanity looks to the stars.

That soon saw multiple countries team up to establish the World Space Agency, which was tasked with solving the extreme energy crisis. Their solution was to colonise and exploit the Moon’s natural Helium-3 reserves to serve power to Earth’s flourishing population.

However, without warning communications with the Moon stopped and the energy source was lost. With Earth plunged into darkness and without power, years pass as the world’s governments come together to set out to re-establish the energy supply…

Deliver Us The Moon will release on the Nintendo eShop for Nintendo Switch worldwide in Summer 2020.