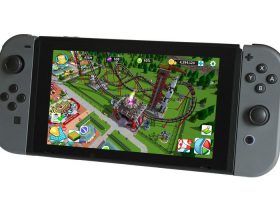 Build Your Dream Park In RollerCoaster Tycoon On Nintendo Switch

Dispatch Games and Success have announced that Psyvariar Delta will release on Nintendo Switch, an enhanced version of the classic shooter.

First released in arcades across Japan in 2000 before later being ported to PlayStation 2, the game retains the classic Buzz system that will let you level up by avoiding direct hits and narrowly evading enemy attacks to graze your plane.

Along with the two original planes, more will be released as downloadable content that will introduce all-new original attacks and can be piloted across all modes.

New modes include the Replay Mode+ where you can challenge each area with your own plane and bombs, and Score Attack Mode, in which you can challenge your high score on any difficulty. Each will have an online leaderboard so you can compete with the rest of the world.

The user interface has been redesigned to show Ex levels, boss health, and invincible time remaining after you level up. The developer hopes that this will help both beginners and experts alike, and, in the options menu, you can choose to show the hit area for your plane and your enemies.

Psyvariar Delta will release on the Nintendo eShop for Nintendo Switch worldwide in Summer 2018.