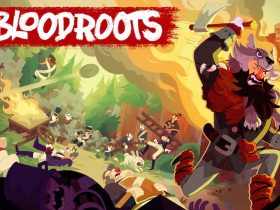 Exact Your Revenge In Bloodroots On Nintendo Switch

Merge Games and Red Blue Games have announced that the roguelite brawler-adventure Sparklite will release on Nintendo Switch.

You play as Ada, a genius engineer who has become lost in a strange land that gremlins have thrown into turmoil. It falls to you to save the world by preventing the invaders from extracting the last of its lifeblood, the magical Sparklite.

While you will invent guns and gadgets to solve puzzles and defeat your enemies, nature is also fighting back in this “approachable roguelike.”

Violent earthquakes, known to the land’s people as disruptions, will periodically shake up the terrain, changing how the world is arranged.

That will result in new quests, minigames and challenges for you to overcome, as you set out to build up Ada’s strength to defeat the mysterious Baron.

Sparklite will release on the Nintendo eShop for Nintendo Switch worldwide in Fall 2019.