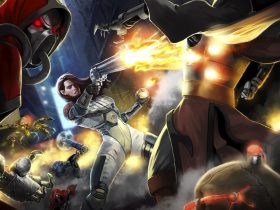 FDG Entertainment and Snikkabo have announced that Venture Kid will release on Nintendo Switch, an action-packed platformer that demands great skill and determination.

The evil Dr. Teklov is building a secret weapon in his huge space fortress. Time is running out, but Andy, a young hero, has stepped up to fight his way through Teklov’s minions and defeat him.

With a chiptune soundtrack from Matt “Slayin” Creamer, there are nine levels and bosses to topple – with secret areas to discover and eight power-ups to help you in your quest. The Nintendo Switch port comes with exclusive Survival and Boss Rush modes.

Venture Kid will release on the Nintendo eShop for Nintendo Switch worldwide on May 2nd, priced at £8.99 ($10).