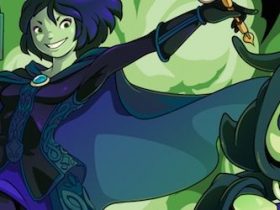 The Nintendo Switch played host to a number of bite-sized indie releases throughout 2017 – games that deliver an experience short but often memorable. Gorogoa for example amazed with its stunning hand-drawn art and inventive puzzles while Mom Hid My Game! is a surprising and outright bewildering journey as you search for your games console. Next up to add to that list is Crimsonland, a game that harkens back to the simpler days of gaming, where story is thrown out the window in favour of constant running and gunning.

Within minutes you’ll pick up just what Crimsonland is all about – a straight up dual-stick shooter that keeps things very simple. At most you’ll find yourself having to move around, shoot and sometimes reload as you attempt to eradicate any aliens heading your way. This is an idea we’re all used to seeing in games by now but then again even well-trodden ideas can still yield fun aplenty. Does Crimsonland?

Quest mode is where you’ll want to head first, introducing you to the game’s enemies, weapons and power-ups gently. Split across six sets of ten stages, each will see you fending off increasingly difficult waves of alien monsters, every kill getting you one step closer to filling a progress bar. Your character, too, has his own health bar, meaning it will take a fair few hits to kill you off. 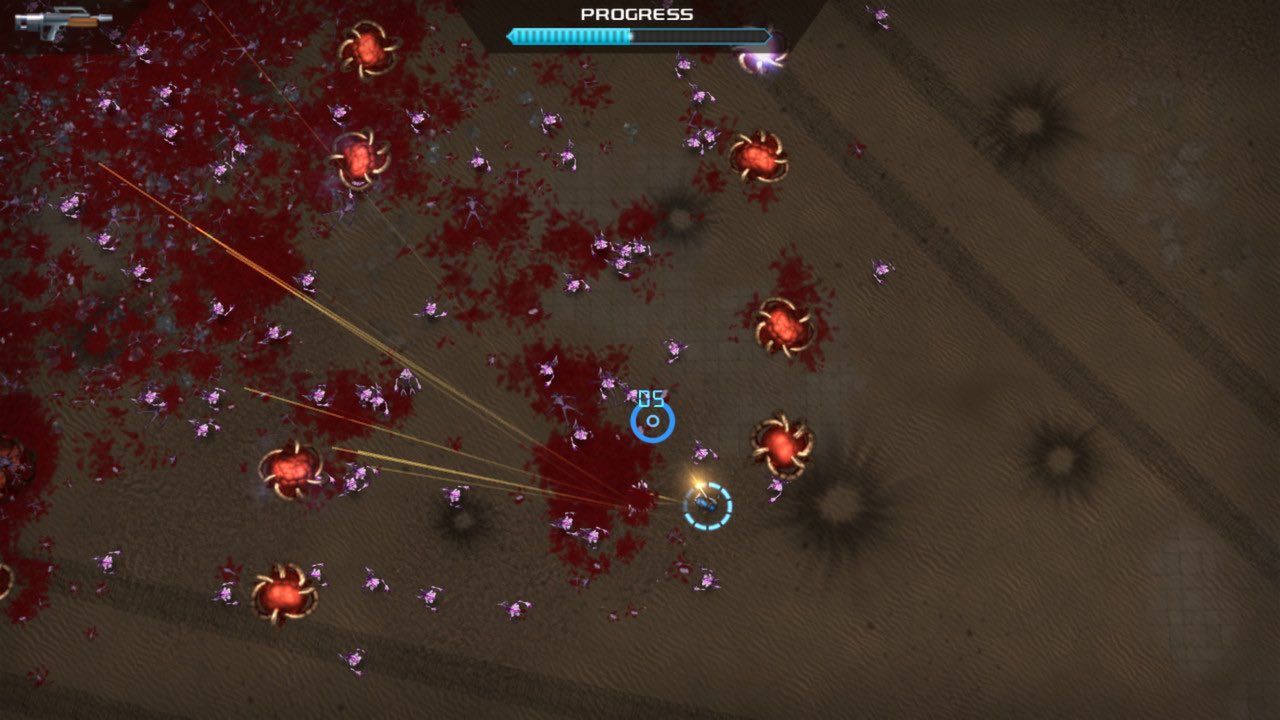 While that may sound like too much of a helpline, trust me when I say that it’s very easy to get swarmed, your health plummeting before your very eyes. As you mow down creepy crawlies some may even drop weapons or power-ups. The former consist of your usual spread, rapid-fire and explosive types while the latter can help you get out of sticky situations with nuclear bombs and spiralling fireballs. The more you play the sooner you’ll discover what weapons work better than others. Rockets for example while powerful require excellent aiming while a trusty shotgun proves excellent in all situations. The weapons aren’t particularly well balanced so be prepared to accidentally pick up the occasional dud amidst the chaos of battle.

Overall Quest mode barely feels like it’s deserving of its title, instead amounting to little more than an extended tutorial. By around the third set of stages, fatigue started to settle, the repetitive nature of each stage becoming too much. As you progress through the mode’s sixty stages though, you’ll unlock weapons and perks (more on those in a moment) for use in Survival mode.

Survival mode is easily the best in the game and one I found myself enjoying much more than the Quest. Here it’s a matter of surviving as long as possible while scoring as many points as possible. While the same weapon and power-up drops can be picked up mid-game, it’s the perks that play a more interesting and important role here. After earning enough experience from killing enemies, you’ll level up giving you access to one of four random perks. These come in many different flavours – everything from improved experience flow and poison bullets to melee abilities and increased chance of dodging attacks. There are a lot of perks in the game overall and discovering not only what they are, but what ones work best with your play style is good fun. 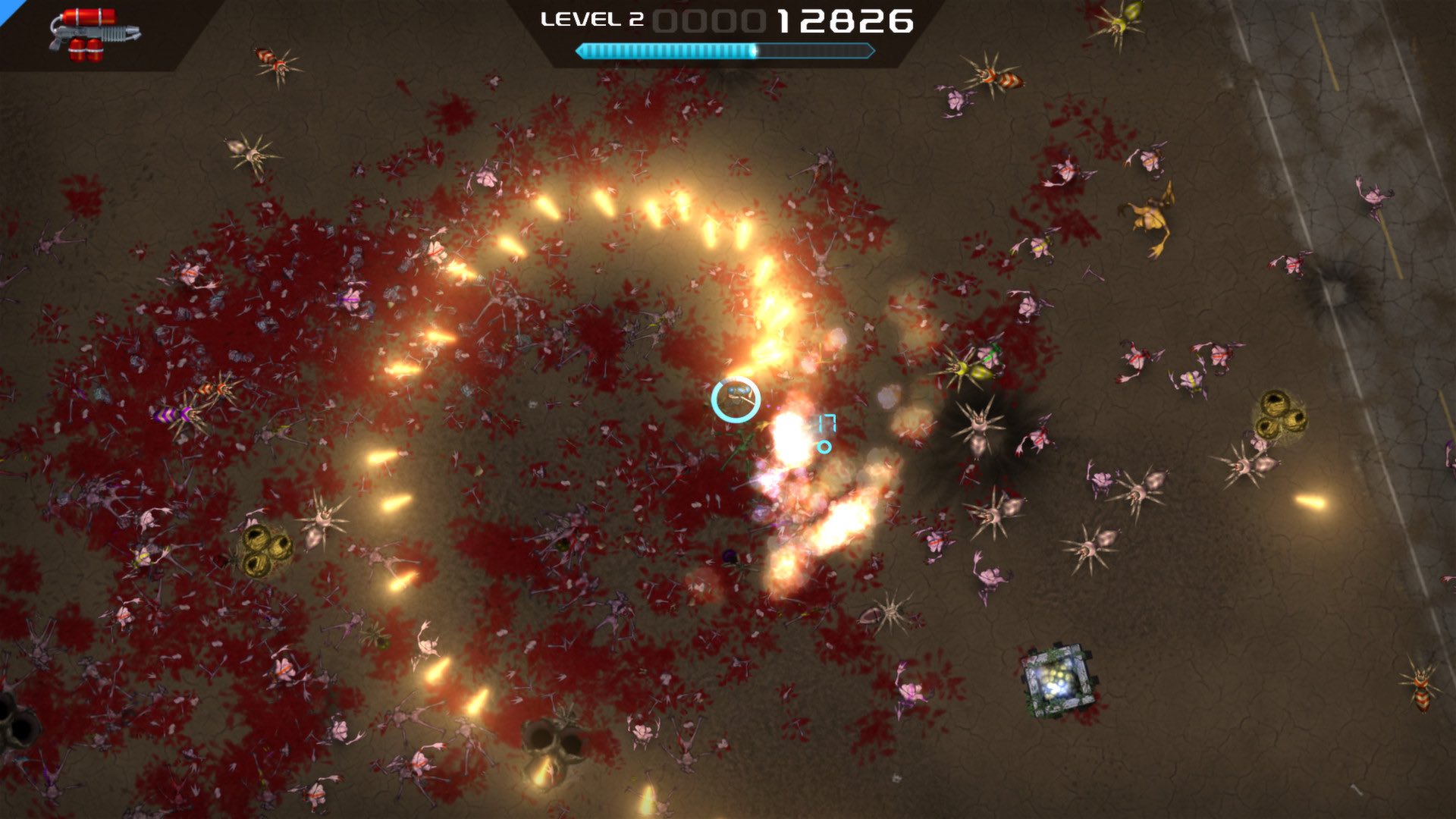 Unfortunately, you start to get a feeling your progress is measured in some way by the luck of your perks and weapon drops. Should you be faced with poor firearms and unhelpful perks then chances are you’ll have a tough time as the waves progress. Manage to luck out however and your score will rise. Sure, there’s an element of skill involved too, but it does feel like too much emphasis is also placed on hoping you’re rewarded with the best abilities.

There are a few more modes also included in Crimsonland that throw in some tweaks and changes to the usual rules. Rush mode puts an AK47 in your hands and has you try to survive as long as possible. Nukefism meanwhile removes weapons entirely, instead having you rely on power-ups to dispatch foes. Weapon Picker allows you to choose any weapon without the need to reload while Blitz is survival mode but at a much more frantic pace. They’re okay for a couple of plays but I would always find myself returning to the vanilla Survival mode. Eventually, though you’ll even grow weary of this.

Visually Crimsonland lacks both style and character. The colour palette is a mix of browns and reds that aren’t very appealing while aliens lack variety and look fairly generic overall. The audio too is something you’ll grow to dislike, the music repetitive and enemy sounds grating even after just a few playthroughs.

Crimsonland is a fairly forgettable experience hindered further by unattractive audio and visuals. While you have to admire its retro-style arcade feel and gameplay, sadly it’s not enough to keep you engaged for long. Survival mode has the longest legs but even then it’s not something I found myself wanting to return back to long term.