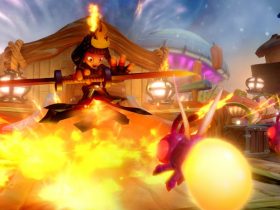 Skylanders Imaginators On Nintendo Switch Does Not Support Traps And Vehicles

HoundPicked Games and Troglobytes Games have announced that HyperParasite will release on Nintendo Switch, a relentless twin-stick shooter with rogue-lite mechanics.

With a parasitic organism consuming the world’s population to make them unwilling hosts to wreak unfathomable havoc, World War III has been declared. Martial law has been enacted, resulting in battle-hardened law enforcers becoming allies with the most degenerate criminals to hunt down those that need to be eliminated.

The unexpected twist is that you are the organism on a mission, with the freedom to control 60 different classes to explore their weapons and moves to conquer the game’s 13 levels, crazy boss fights and mini-bosses.

“Their vision for HyperParasite is commendable and we believe there is a huge collective of gamers who will find this title one that they will enjoy immensely. We have great faith in this title and Hound Picked Games will support it throughout until release in 2019!”

HyperParasite will release on the Nintendo eShop for Nintendo Switch worldwide in 2019.