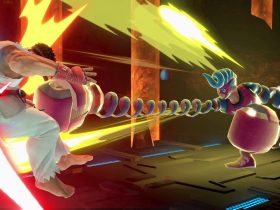 Super Smash Bros. Ultimate Has 59 Assist Trophies: Here’s All Of Them In A List

Arriving alongside the standard edition ($39.99), the Collector’s Edition ($59.99) has been “filled with a bouquet of premium items that will set any fan’s heart aflutter.”

Those premium items include an acrylic keychain featuring characters from the game, and, for the first time in a Code: Realize release, a 60-page art book, and a soundtrack CD.

Reimagining Victorian-era London with steampunk motifs, Code: Realize ~Guardian of Rebirth~ is a steampunk visual novel that will see you play as Cardia, a lonesome youth whose poisonous touch risks killing her companions.

With a branching narrative and multiple endings, you must unravel the secrets from her past with help from five European literary figures – Arsène Lupin, Abraham Van Helsing, Victor Frankenstein, Impey Barbicane, and Count Saint-Germain.

Code: Realize ~Guardian of Rebirth~ will release for Nintendo Switch in Europe and North America in February 2020.