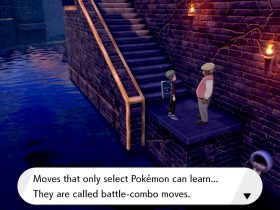 With the upcoming Nicalis-published 2D fighter Blade Strangers soon to be brawling its way onto the Nintendo Switch, now would be as good a time as any if you want to get familiar with a chunk of the roster involved. If you were to dig deep enough into the Nintendo eShop you may already notice some familiar appearances from games such as Shovel Knight: Treasure Trove, The Binding of Isaac: Afterbirth+ Review, Cave Story+ and Mighty Gunvolt Burst to name just a few. One particular face joining the fray is Princess Solange Blanchefleur de Lux who is the main lead from this very game, Code of Princess EX.

Code of Princess EX is an anime side-scrolling beat ’em up packed with RPG elements. With Tetsuhiko Kikuchi on the team, who worked as one of the lead designers for SEGA Saturn’s Guardian Heroes, he has brought with him the spirit of Treasure’s cult classic to the increasingly popular hybrid console. First released on the Nintendo 3DS back in 2012, Code of Princess EX has you slicing your way through a series of bite-size chapters that usually last between 2 to 10 minutes each. The main protagonist, who looks like a buxom blonde cosplayer running very low on tinfoil for her armour, must flee from the castle of her heritage while dragging a massive sacred sword known as the DeLuxcalibur along with her.

This leads her on a journey where she will meet a series of companions that are very much akin to The Wizard of Oz. However, rather than a lion, tin man and scarecrow, Princess Solange soon makes alliances with a zombie, thief and a short pixie-looking dude donning an electric guitar. However, these aren’t the only members to join her party, as every other chapter on your adventure seems to elect at least one new character to her team. Who would have thought a tall busty blonde young woman wearing nothing but the alloy of a toaster and a belt would attract so many followers? It’s probably down to her happy go lucky personality and the warmth of her magic DeLuxcalibur that everyone is drawn to her. That, and saving the world from an evil Queen with a magic stone and an army full of monsters, of course. 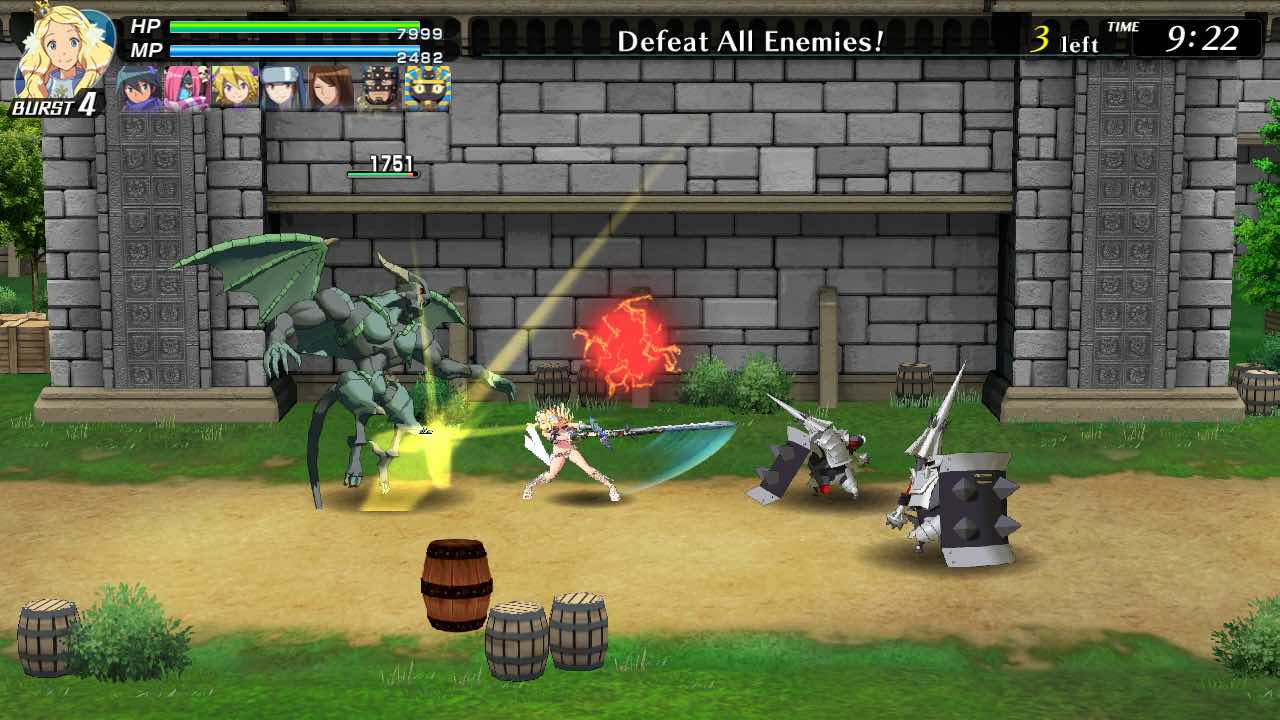 As much as I may mock the character design and plot. I must admit that I am a bit of a sucker for abstract fantasy concoctions that barely makes any logical sense. In which case, Code of Princess EX ticks this box off with a fat permanent marker, as each supporting character awkwardly stumbles onto the screen like it’s the stage of a pantomime. While this may sound like a negative criticism, it does actually add to the charm of the adventure. Take the zombie of the crew, for example, Lady Zozo (who isn’t actually a zombie but a necromancer) held together by various dead body parts due to her real body being stolen. Whereas the wandering minstrel elf kid shredding the guitar has his ambition of being a high-level mage who is very self-aware of his RPG stat system. Regardless, whether or not you will be invested in the comedy or plot is purely down to your own taste. It is a very wordy affair, but can at least be skipped through fast enough if your just looking to beat things up.

When it comes to the combat, it takes a leaf from Guardian Heroes in how you can hop vertically between three lanes of the playing field as opposed to the free range of movement usually found in, say, a Golden Axe-style hack ‘n’ slash. You have a light and heavy attack that does what it says on the tin, along with a poke that will highlight an enemy of interest to lock onto. Combinations of attacks are simply spammed with the odd directional input thrown in at the end to flesh out a combo. And then your special burst move will fire you up to deal a bit more damage, especially more so towards the tagged opponent that you have previously locked onto. You also have a standard guard available to you that not only defends you from attack, it is also used to hop between each lane when held down and combined with an up or down flick of the stick.

With all the mechanics thrown together, you have a fairly competent hack ‘n’ slash that you can venture through either solo or with a compadre. Juggle mechanics allow you to keep a combo going for as long as your limbs can reach, while the lane swapping feature provides space for crowd control and approach tactics. This may sound like a recipe for success, however, in practice, it can feel a bit clumsy and slow on response. The enemy AI and fight pattern rarely come across as exciting in any way, and besides a few cool looking moves from your characters, the combat itself is a bit too floaty for my liking. It would have been nice to see the speed of the combat and input overall tipped up even just slightly, as its flow can tend to drag out a bit to most probably stay in line with its RPG roots. 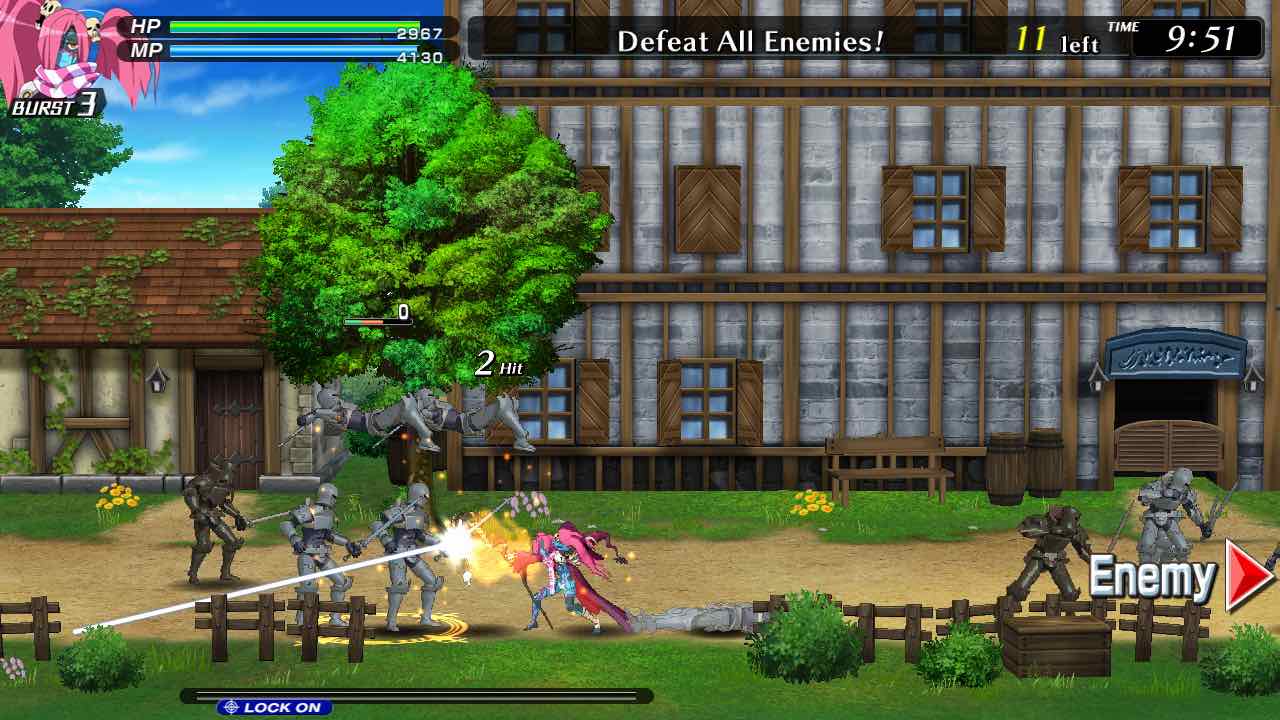 Speaking of RPG elements. The whole levelling up system that’s heavily implemented is both simple, yet a little overwhelming in how many characters there are available to you throughout the game to upgrade. Despite having such a healthy collection of teammates to control in combat, the game doesn’t give you much reason to depend on anything more than one or two characters based on how high you level them up. The good news is that each hero does get their experience bar topped up, regardless of whether or not you use them. It’s just that your most used characters will, of course, skyrocket in comparison to everyone else. When the difficulty spikes do eventually hit, fights soon become a test of endurance spamming as you constantly topple the same opponents into the air over and over again. This lack of damage output is obviously due to the game’s reliance on the stat system, which can be a put off when tempted to try out some of the less levelled up warriors.

This is simply the game’s way of telling you to either replay previous levels or other modes to inherit coin, stat upgrades and experience points to strengthen your team. It’s just that without any kind of swap system in play during combat, it can make the other characters seem even more redundant and underused. Throughout the game I often visualised having the ability to change on the fly between two or three of the chosen fighters, even maintaining a shared life meter between them if need be to keep within the balance of the game. Besides the storytelling, it barely even feels like a team at all. The rest of your crew just sit back off-screen and watch your chosen ally do all the work.

In regards to online features, there really isn’t a lot that I can say due to the servers being dead as a doornail even after release. There is a code option for private lobbies between friends to venture forth on the main campaign and extra challenges, although why online can cater for four players while couch co-op only allows for two is a mystery. This also goes for the VS mode, where you can duke it out with live opponents to show who’s boss – a feature that also isn’t a local option. These absences are unfortunate because the Nintendo Switch convenience makes four player gaming easier now than ever before. Considering this is the ‘EX’ version of the game, it makes no sense not to implement it for this console release. 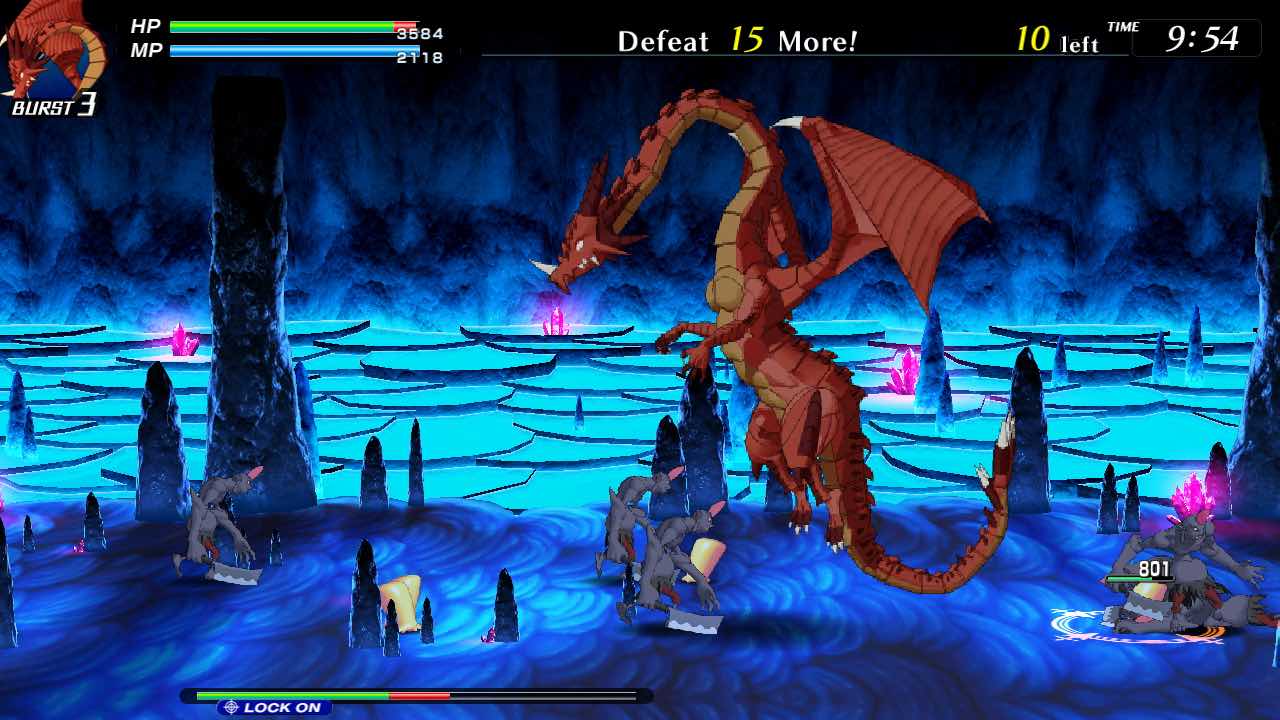 In playing Code of Princess EX, it’s very clear off the bat that this is a 3DS port. The quick blast gameplay setup works conveniently well as a portable game. This is more so the case when it comes to the added short burst freeplay and mission options that allow you access to control literally every character and enemy that you bump into. It still visually looks just like a 3DS game, even with its HD facelift. The backgrounds have a sharpness to them but the characters themselves come off very fuzzy and low-res.

It’s not as bad to look at when playing in Handheld mode to be fair, which does compensate for the fact slightly, as it is clearly a better gaming experience overall when played under your chin. What is absent from the 3DS version is the English voice translation. The voice-over in Code of Princess EX is Japanese only due to Atlus being originally in charge of the western localisation. For whatever reason, Nicalis have had no luck with porting over this audio feature which is a shame as it’s apparently supposed to be quite good.

If you’re an avid anime fan that likes a bit of kooky comedy-drama with your spammy beatdowns then Code of Princess EX isn’t too bad a game to carry around in your backpack. Some will undoubtedly find the story getting a bit too much in the way of the action, and the small moveset for each character really doesn’t help to hide its highly repetitive gameplay. It’s good to at least see some meat to its combat though, and the character designs are imaginative enough to land some flair to the story. Just try not be too surprised if you don’t happen to fit in with the cluster of niches that Code of Princess EX is aiming for. It does look to be tailored towards a very particular appetite, after all.