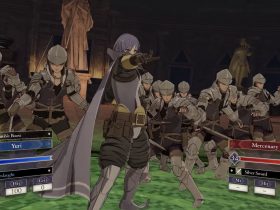 OOO Valnat and Walnut have announced that CASE: Animatronics will release on Nintendo Switch next month.

In this first-person stealth horror game, the police department has fallen under the control of an anonymous hacker.

Working late can lead to tragic consequences, which, as John Bishop, you will soon find out for yourself. The detective is swamped with work, and, working on an investigation late into the night, a strange dream and a mysterious phone call from an old “friend” soon see you fighting to survive.

The police department has lost electricity, the security system has been hacked, and all exits have been locked. To make matters worse, something is following you.

Red eyes shine from the darkness and clanking metal echoes through the halls. Those come from animatronics, and something unknown and horrifying is controlling them. It’s up to you to work out what’s going on to survive the night.

That will see you use a tablet to watch the footage on security cameras, using closets and cabinets to sneak between the animatronics as you try to work out what’s happening – searching the police department for an explanation.

CASE: Animatronics will release on the Nintendo eShop for Nintendo Switch worldwide on October 3rd priced at £17.99 ($19.99).