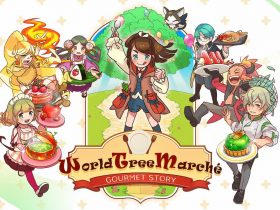 World Tree Marché Out On Nintendo Switch This Week

Seaven Studio and Brain&Brain have announced that Burly Men at Sea will release on Nintendo Switch next week,
which is a folktale about three large, bearded fishermen who step away from the ordinary to seek adventure.

With a colourful art style and hand-crafted animation, the game is set in the waters of early 20th century Scandinavia where you will encounter creatures from folklore.

You play as the storyteller and wayfinder, and will shape the narrative around the three fishermen. Playing through once will reward you with a single tale, with branching paths encouraging repeated playthroughs in which you can make different choices.

Burly Men at Sea will release on the Nintendo eShop for Nintendo Switch worldwide on April 12th.