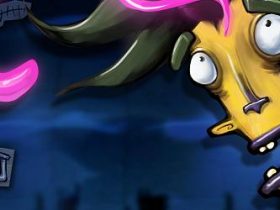 Zoink!’s Stick It To The Man headed to Wii U

Playchemy has announced that Space War Arena will release on Nintendo Switch, a strategy-action game that has looked to blend real-time space combat with tactical and strategic gameplay.

Starship combat on a grand scale, Ecco the Dolphin creator Ed Annunziata has led development on the game – which is an homage to the original Spacewar!, released in 1962.

“This has been one of my favorite games to make,” explains Playchemy CEO and president, Ed Annunziata. “We’ve been working hard on Space War Arena for a long time and as a small indie team, it’s so rewarding to announce your product and be so close to launch.

“Whether it’s playing the solo campaign or shared screen 1v1 multiplayer, we think players will really enjoy the strategic decision making and have as much fun playing it as we do.”

You must build an armada from 30 different evolving units, adapting to your enemy as you command your fleet to destroy their bases and claim their space.