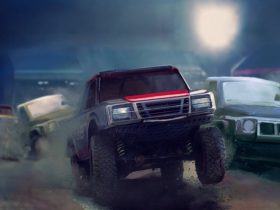 Ysbryd Games and Glitch Factory have revealed that No Place For Bravery will release on Nintendo Switch.

This top-down action-RPG “explores the lengths a parent would go to find their child in a wartorn world, in which Thorn, an old soldier dedicated to the advancement of his people, sets out to expel the nightmares that plague him.

After discovering that his long-lost daughter Leaf still lives, Thorn sets out with his disabled foster son Phid to find her – enduring a painful quest that will force him to confront the decisions that he made in his past.

With an equal emphasis placed on narrative and action, the game’s combat encounters have been created around fast-paced movement mixed with swift strikes and tactical parries.

As you explore the world of Dewr, you will earn upgrades from “significant encounters” rather than levelling up and increasing stat numbers.

“Multiple members of the team had to deal with toxic relationships and absent parents,” explains Glitch Factory developer Matheus Queiroz.

“Through the trials and tribulations of our lives, including the long road of development, we have persevered, and we hope our shared experiences will be heartfelt by the PC and Nintendo Switch communities in 2021.”

No Place For Bravery will release on the Nintendo eShop for Nintendo Switch worldwide in Q1 2021.