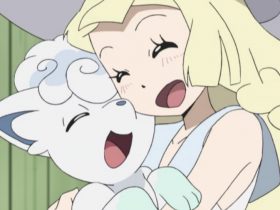 Set two years after the cataclysmic events that concluded Bravely Default, we return to Luxendarc on the precipice of momentous change.

Now the spiritual leader of the Crystal Orthodoxy, Agnès Oblige has worked tirelessly to convince the Duchy of Eternia to set aside their differences and negotiate a peace treaty between the opposing factions.

With the declaration ceremony at which such treaty will be signed drawing near, the impending truce is threatened when a mysterious man known only as Kaiser Oblivion and his forces invade. Overwhelmed by the unexpected attack, loyal Crystalguard knight Yew Geneolgia is critically injured and Agnès is abducted.

Soon recovering from his wounds, Yew is dismayed to learn about what has happened. With the Crystalguard having been left devastated by the attack, he remains determined to rescue Agnès from Kaiser Oblivion’s flying fortress, the Skyhold.

Showing resilience in the face of adversity, this motivation largely spurs your grand adventure in Bravely Second: End Layer. Where Bravely Default had revolved around the Great Chasm and restoring the four elemental crystals that brought light to the world, the sequel builds on the characters and fantasy world that many came to adore.

For those that haven’t saved Luxendarc, I would advise that you tackle Bravely Second’s predecessor first. Not that you wouldn’t be able to enjoy the sequel’s merits, but developer Silicon Studio has an overriding expectation that you will already be familiar with the extended cast.

With Agnès in captivity, the player soon recruits the tomboyish Edea Lee – now head of the Eternian Ducal Guard – and Tiz Arrior to their party. Magnolia Arch, a mysterious woman that fled the moon after it was ravaged by Ba’al, rounds out your companions, and, while lacking Ringabel’s distinct Casanova flair, the localised script is still riddled with hilarity and heartfelt moments.

Party Chat also returns, optional conversations that are frequently prompted on your quest. While arguably slowing Bravely Second’s pacing, these serve to once again immerse you in Luxendarc’s world and breathe life into its pixellated heroes. It’s a likeable cast, even if Yew’s “For gravy!” battle cries mystify and Magnolia’s exclamatory French outbursts seem out of place. Dual audio is packed on the Game Card, so players can choose between whether they want to spend their adventure listening to the English or Japanese voice cast – switching mid-game whenever they wish.

Battles, an integral part to any noteworthy role-playing game, see refinement. The Brave and Default mechanics return, allowing players to choose to either take a defensive stance to build Brave Points or unleash their pocketed points to perform several attacks at once. This risk-taking can help you quickly take down weaker enemies, but can equally leave you wide open to retaliation if you misjudge your battle strategy.

When looking to topple mightier foes, Bravely Second can turn the tide in your favour. Expending a Sleep Point will let you temporarily freeze time, opening a brief tactical window in which you can make a bonus attack or recover your party’s HP. These Sleep Points aren’t unlimited, and must be earned either freely by placing your Nintendo 3DS in Sleep Mode, or, for those that are more impatient, by purchasing SP Drinks on the Nintendo eShop.

If you defeat the enemies that you face in a single turn, players will be presented with the “Bring It On!” option. This encourages you to battle your way through another round, multiplying the EXP earned and paving the way to greater rewards. It’s another gamble, as the Brave Points across your party will remain the same from the previous fight, but helps to partly alleviate frustrations around the inevitable level grind.

On that point, Autobattle is introduced and lets you save command sets that your party can automatically perform when faced with random encounters. If you feel the need to grind EXP, this lets you increase the Encounter Rate – as seen in Bravely Default – and recklessly run around in circles to lure enemies. Players need only keep an eye on their party’s success, and can retake control if a battle suddenly takes a turn for the worse.

Away from that, players will spend time experimenting with different Job classes and strengthening their party with sturdier equipment. Job classes from the first game reappear, with plenty of new additions such as the Fencer, Charioteer, Exorcist, Astrologian, Patissier and Catmancer. Such breadth means that you can experiment with whichever Jobs that intrigue you, but always consider how they will interplay with the rest of the party.

With the spired city Al-Khampis as the hub town that you will first spend time near, Bravely Second will take you to many new locations while revisiting a handful seen in Bravely Default. The handpainted art style continues to look sublime, seeping charm from every pixel and remaining to sit among the best-looking games on the handheld. The stereoscopic 3D accentuates this, but isn’t necessary to appreciate their meticulous artistry.

The soundtrack, penned by Supercell songwriter Ryo, has the unenviable task in trying to match the music composed by Sound Horizon’s Revo for Bravely Default. It falls short on being as memorable, despite the adrenaline-inducing rock anthem that Magnolia Arch sparks when in battle.

StreetPass support retreads the same ground as Bravely Default, tasking players with restoring a ruined base on the moon. Players that you pass will boost the base’s population, speeding up your rebuilding efforts which in turn will reward you with weapons and items over time. Players will also be required to defend the moon from Ba’al demons that appear, taking the wheel of the Buster Ship to let loose a barrage of firepower to weaken them. These can appear through StreetPass or SpotPass, and will reward you with items or EXP once defeated.

Such diversionary content takes a more mirthful approach in Chompcraft, your party creating plush chompers that they drop into cartons. It seemed slightly pointless, even if funny, when it was first introduced, but you earn cp that can later be exchanged for in-game currency. It’s an optional minigame in itself, with players able to buy tools and snacks to improve efficiency and keep their party energised. Boosting production parameters will require a watchful eye, but you can leave this running whenever you want to take a break for some extra money.

Where Bravely Default delivered revolution, Bravely Second: End Layer presents evolution. Whisking players back to Luxendarc’s charm, it is everything that we could have ever wanted from a sequel. Silicon Studio strongly lead the charge in a bountiful year that promises numerous Nintendo 3DS exclusive RPGs, and in Bravely Second have made sure that the bar remains high.